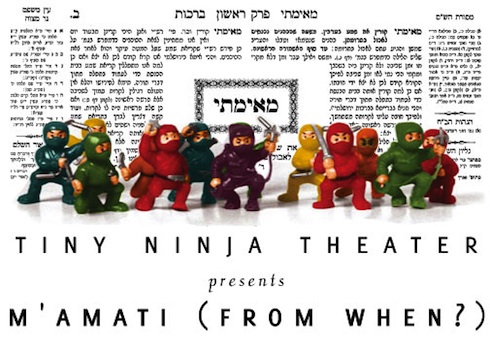 “Tiny Ninja Theater presents M’amati (From when?)” is an educational performance piece based around the opening Mishna in (tractate) Berachot.  It uses everyday objects, oversized copies of Talmud, and, yes, tiny plastic ninjas, to try and figure out the appropriate time for reading Shema at night.

It all started back in New York City.  I was spending the day in Central Park, waiting in a long line for tickets to a production of Shakespeare in the Park that evening.  (amazing how much time you have on your hands when you’re single and childless, right?)  My encounter with Talmud study was just beginning, and I was trying to puzzle out a page of Gemara with the help of a Daf Yomi class I had downloaded from the internet.

Little did I know that a subsequent blog post by the guy waiting in line next to me was to lead to an invitation to Limud – a festival of Jewish learning in England.  Turns out not everybody expects to hear that the guy learning Daf Yomi next to them makes his living performing tiny ninja versions of Macbeth and Romeo & Juliet (see tinyninjatheater.com for more details).

What Makes the Piece Work

I think what makes the piece work is that it’s really just an off-beat account of my own struggles with understanding a page of Gemara.  What the words mean, what the issues at hand are, and what all the different size fonts and type-faces on the page are all about.  By the end of the piece, the audience has actually gone through the process of learning – as well as being (hopefully) entertained.

I usually play to older audiences, but once played for a group of sixth-graders.  They surprised me by being one of my best audiences.  I’ve often thought it could be fun to help kids develop their own pieces based on what they’re learning – be it Talmud, Mishna, or even their bnai mitzvah portion.

I now live in Jerusalem with my family and can be reached at dov at tinyninjatheater.com.

Dov Weinstein is the  Director of Tiny Ninja Theater, which produces classical theater dedicated to the principle that “there are no small parts, only small actors.” It features inch-high plastic ninjas and assorted dime-store figures. Company performances have received critical aclaim at venues which have included The Kennedy Center in Washington D.C., and The Royal Shakespeare Company in Stratford-on-Avon, England.

Since this is appropriate to the period leading up to Shavuot, I have included this Parshat Pekudei G-dcast told by Dov. Enjoy!

You can also read more about Tiny Ninja Theater’s M’amati in this review.