As part of the Mitzvot Unplugged Series, we are happy to have a guest post by Ilana Masri from JewishHomeschoolNYC.blogspot.com. 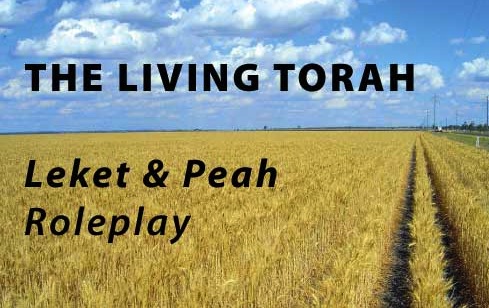 As a homeschooling family, we feel privileged that we have a seemingly endless amount of hours each day to focus on our children’s character development. We address Jewish values in a twofold manner. We use the weekly parasha as our springboard for discussions  and our real life experiences for putting the mitzvot into action. With this approach opportunities are constantly arising to work on middot like anger management, charity, perseverance, respect, etc.
Each week we go through the parashat hashavua (weekly Torah portion) with the girls and pull out the mitzvot that they can relate to the best. We then role play a variety of scenarios surrounding those mitzvot. My girls love this type of pretend play. Whatever role they take on, there is a lesson to be learned. They feel so proud when they are acting as the virtuous person who is  performing the mitzvah. They also get a kick out of being the  “bad guy” which is followed by a lesson on  empathy for the person who is slighted by their actions. For example, while examining parashat Acharei-Kedoshim recently, the topic of mattanot le’aniyyim  (gifts to the poor) is addressed through the mitzvot of leket and pe’ah . Leket is an obligation on the farmer to leave the crops that fall to the ground during his harvesting for the poor. Pe’ah is the farmer’s obligation to leave a corner of his land unharvested for the poor. We discussed these concepts and then easily turned them into a role play scenario by using some toy food and Lego blocks. The girls each took turns being either the farmer leaving the dropped food on the ground or the needy person collecting the fallen crops. We then used Lego blocks to mark off a square farm land and made sure to leave one corner untouched for the needy. This led to a discussion about acknowledging that our possessions are gifts from Hashem and that we must not harden our hearts and be stingy with them.
This lesson transitioned beautifully into real life practice when we went grocery shopping later in the afternoon. While at the grocery store, a woman pushing her son in a baby carriage walked over to us and asked us for tzedakah (charity) so she could buy some food for her child. I promptly opened my wallet and asked my older daughter to give the woman a dollar. The smile on my daughter’s face was priceless. I knew she had made the connection between her act of kindness and this morning’s lesson. What I hope to do in the future is have a special wallet set aside for my daughter filled with her own earned money so that she can get a sense of giving tzedakah from money that she feels a stronger attachment to.
By viewing the Torah as a living text we hope to pass on to our children the lesson imparted by Hillel Hazaken, “What is hateful to you, do not do to your neighbor: that is the whole Torah while the rest is commentary; go and learn it.”

Ilana Masri is a Brooklyn, NY based Speech-Language Pathologist and Director of Classy Crafts Sunday Program. The Masris homeschool their 4 and 2 year old daughters through a Torah lens and enjoy using the world as their textbook. Follow their adventures in homeschooling on their blog: jewishhomeschoolnyc.blogspot.com.