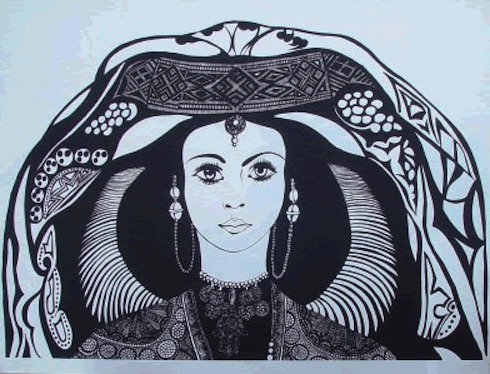 As we are back in wedding season I thought I would bring you highlights of  Nissim Sibony’s “Moroccan Jewish brides” series. Nessim Sibony (born in Marrakech, Morocco,) is an LA based artist and educator. His work is largely paintings but also includes other media and ritual works.

The Moroccan brides were originally conceived as a print series for an exhibit in Morocco in 1986. The idea was to bring a bit of local Moroccan culture back to Morocco. Although the exhibit was canceled due to political reasons,  Nessim completed the series and serigraphs can now be found in private collections (including corporate collections) around the world. The series was also exhibited in Temple Isaiah, Los Angeles. 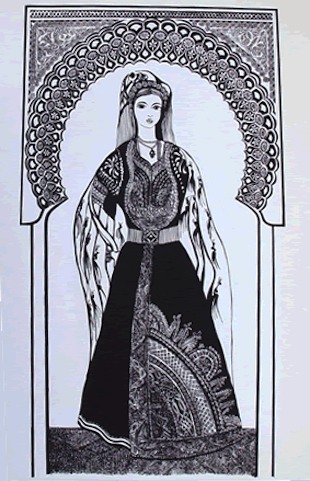 Just to give a little context- you know how everyone thinks that wedding dresses should be white? Did you know thats actually a modern concept? You know who popularized the concept? Queen Victoria!

In Morocco Jewish women did not dress in white but rather in colorful and decorated outfits. Nessim researched the costumes and used archival data as a starting point for his series.I am including two works from the series (with permission of the artist.)

I’d like to give a bit of a description of one of the popular variations of clothing now.

Moroccan brides were known for the Kswat el Kebira or Great Dress. Research has traced this dress to a costume worn by the Jews of Spain. Jewish women from Northern Morocco tended to wear it, in particular, at the henna ceremony and their wedding.

It was quite elaborate and usually included: 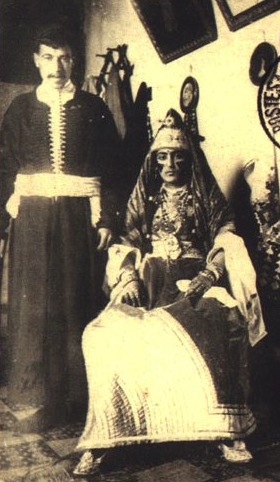 The dress, accouterments and hairstyles varied regionally. but the design of the gold embroidery on the costume of the bride from Rabat on a 1912 postcard (left) seems to be common. This woman seems to be wearing her sleeves under the gonbaiz as well as a shawl over her bejeweled headdress. Her jewelry reaches to her belt.

In the first work, Nessim’s bride also wears a shawl over her headdress. In both you can see the highly ornate decorations and the second bride has a similar skirt, although with greater intricacy.

Sibony’s works are extremely bold and detailed. The brides do not smile but are neither bashful nor fearful, but rather confident. Pattern and decoration is highly detailed.

Just to note- The great dress was worn at other festive occasions and today the dress is mostly worn for the henna ceremony.

Thank you Nessim for use of your images in this post. Note that all rights to images belong to Nessim Sibony and may not be used or changed without his permission. To see more of his work please go to his website.

(Note: Many years ago I was the editor of the Paper Pomegramme, newsletter of the Pomegranate Guild of Judaic Textiles, Toronto. The May 2006 edition focused on Morocco and Moroccan Jewish wedding costumes and there are more pictures there, some in color. To order a copy of the newsletter be in touch with them. Also Aviva Muller Lancet is the expert and a collection of her articles was printed by the Ben Tzvi institute several years ago as “Garments with a Message Jewish Wear in Islamic Lands” in English and Hebrew.)