The Mitzvot Unplugged Series has to do with teaching kids Jewish values in a creative way. One of the ways of doing that is through music. I want to thank Julian/Chaim Horowitz from the Maccabeats for agreeing to an interview, as part of this series. 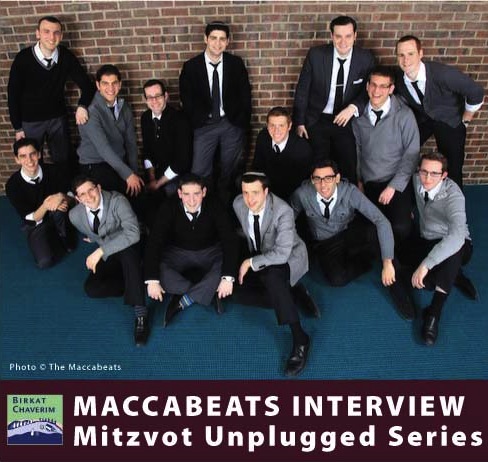 How does being representatives of Orthodoxy and the concept of Torah uMadda come out in your songs and performances?

Though it probably didn’t start out this way, as our fanbase grew we realized that, in addition to making great and meaningful music, we had something of a responsibility to be ambassadors of YU/Modern Orthodoxy/Torah uMadda to both the rest of the Jewish people and the rest of the world. And while this mentality figures strongly in everything we do, I think our unique way of representing who we are and where we come from is by not shoving it in anybody’s face, but in just being ourselves in the best way that we can be, and hoping that people appreciate that.

Torah uMadda, which for our purposes here I’ll define as the synthesis of the best that has been thought and said in the world with our very own sacred tradition, is a deep part of the identity that we represent. On the most basic level, we are not afraid to cover a song that we’ve found meaningful even if there’s no direct or explicit connection to Jewish sources. But it also means that we find it important to go out and engage with the greater world, whether that means meeting with President Obama or even something as minor as performing at the music festival in our local Washington Heights park. And we did all of this while wearing our kippot, because the concomitant to this engagement is full commitment to our heritage and traditions.

Your song Shine was used to help raise money for the Gift of Life Bone Marrow Foundation – could you talk a little about how and why you chose to do that?

Gift of Life is one of those organizations where literally every dollar raised could help saving someone’s life. There are hundreds and thousands of genetic samples sitting in storage right now that could be processed with the proper funding. And any of those samples might lead us to the life-saving match that a suffering patient so desperately needs. Additionally, there are still millions and millions of people who have not performed the necessary cheek swab necessary to join the registry.
After the tremendous success of our initial Miracle Match campaign, associated with our video “Miracle,” we decided that the song “Shine” was also another great opportunity to raise both awareness and money for this great cause.

Some of your songs, like “The Book of Life”, are about midot both from a universal and specifically Jewish perspective and many of your songs emphasize midot and Jewish concepts. Can you talk about how you choose what to emphasize in your songs?

That’s a very good question, and I’m afraid I don’t really have a great answer. The creative process is a difficult one to define or describe, especially when practiced by groups of people working on video, audio, and lyrics separately and together. But I think, at the end of the day, we’re presenting content that is both educational and entertaining (some have taken to calling that edutainment). So we’re always very conscious of those two themes.

Could you share any stories about the impact your singing has had?

Till this day, we get emails from people all over the world telling us that our music has inspired them to light Chanukkah candles for the first time, or to go to school wearing their kipa for the first time. It’s stories like that that keeps us going.

What can we look forward to next?

We have a few great projects in the works, but one thing you should expect is that we’re going to constantly be branching out of our comfort zone and exploring new areas. So far we’ve broken into original music and Broadway, but there’s a lot more to come!

The Maccabeats tour internationally, but are also available for private bookings and simchas.
Tour information and booking information can be found at their website, www.maccabeats.com

The Maccabeats - Smart Ways to Live

Jew in the City Presents "The Sound of Silence" feat. The Maccabeats