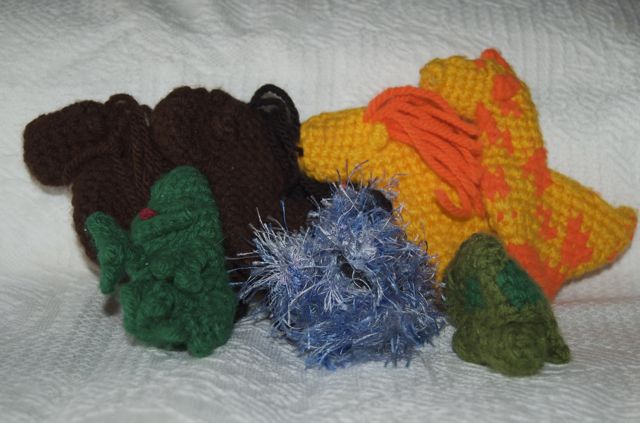 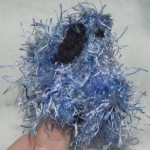 In honor of this weeks parsha- parshat Noach or Noah, I’m including a photo of the animals I crocheted for my daughter. The inspiration for these was two puppets I bought many years ago at the puppet museum in Atlanta (a great museum!) which were knitted in South America. I bought a colorful parrot and a lama. When I bought them originally I figured I could probably figure out how to do them, at least the lama. 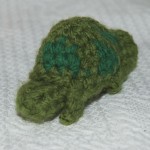 I am not really a knitter but I do crochet so I adapted the lama into a sheep, and made two as gifts. I gave one to a niece and one to my father-in-law as a Passover afikomen present (in our family we give everyone an afikomen present.) 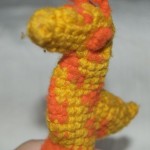 I never did make my daughter a sheep but i did make two horses, a lion, giraffe, turtle, bird, and a frog. Actually I’ve made lots of frogs, because I made one for each child in my daughter’s gan (kindergarten) around Passover. Also I find that puppets are a simple activity to do while I’m waiting for appointments and small enough to carry around in a pocket. 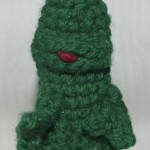 The frogs are the easiest to do. Basically you crochet some stitches of a length to fit around your finger, connect the length with a stitch and crochet almost to the height you’d like the frog to be. Then reduce and then finish off the head. For a mouth stitch across two rows on the surface of the puppet and then add a red tongue. Arms can be crocheted off the surface of the puppet. You can pretty much do it as you like. I did single crochet and came up with a mouth and arms I was happy with, but there are many possibilities. If I make another one I will try and photograph it in stages and post a tutorial of how to make one, if there is interest.