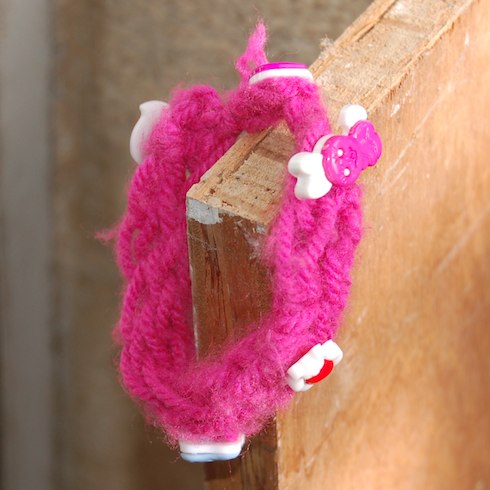 I know that I briefly mentioned the project that we did for Parshat Chayei Sara. As a tie in to the two bracelets that Rivka/Rebecca received from Eliezer we decided to do two types of bracelets, I chose one and my daughter chose the other. We did not decide to do a nose ring (my daughter was not into that although she did take the opportunity to ask someone with a nose ring whether it had hurt when she had it pierced.)
The first bracelet was a throwback to my youth- finger crochet with beaded crochet thrown in. Basically I told my daughter to choose 5 buttons (I think she found every little picture button I had) and a yarn color she’d like. While she threaded the beads onto the yarn, I crocheted a loop onto the end of the yarn to make a “button hole.” 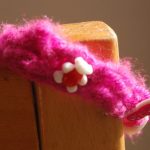 Then I explained about weaving and wove the yarn over-under-over-under her fingers to form two rows of loops. She then got to pull the bottom loop over each top loop. Once I showed her a few times she was able to do it herself and was able to do the weaving with a few reminders of how to do it. Every once in a while we pulled one of the beads through. Since she was actually sick, she was a bit too tired to concentrate on doing the whole bracelet herself, so I helped her for part of the weaving. When we felt it was big enough we finished it off.
For the other bracelet my daughter decided she wanted to use beads she received as a present from her father rather than learn a new technique.

We were rather pleased with how well the finger crochet bracelet came out and she wears it alot.