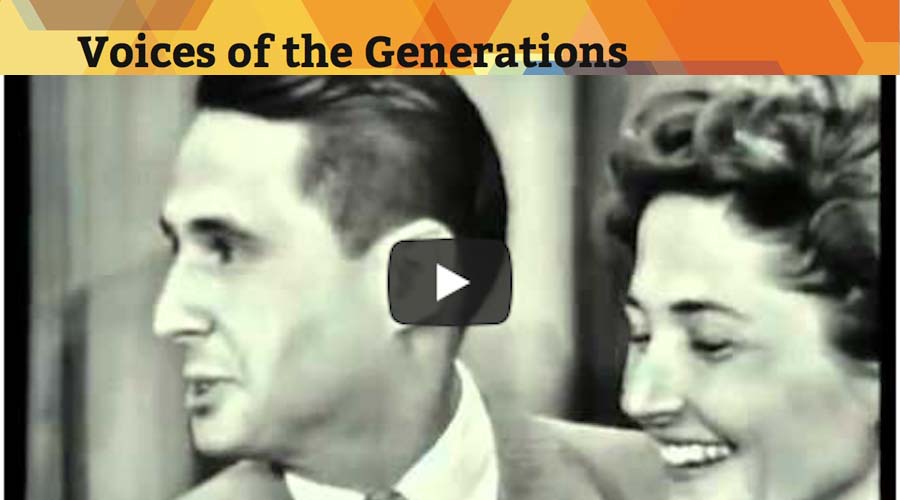 It is hard, oh so hard to teach about the Holocaust and genocide. It is hard to imagine 6 million, the number of Jews who died, to imagine 1 and a half million children who had no chance to grow up. That is why the unique idea behind a program called Voices of the Generations  is so important. It teaches about the Holocaust through the story of one family a family similar to many of our own families, the survivors Walter and Hanna Bloch Kohner and their daughter Julie. Through their story, Voices of the Generations provides a human and very personal introduction to the Holocaust.

This is Your Life Hanna Kohner

Hanna Kohner’s story was the first Holocaust survivor story told on American national television when she was featured on Ralph Edwards’ This Is Your Life in 1953. In over 20 years of telling her parents’ story Julie Kohner has shown the video of the show and developed a curriculum to be used by teachers in conjunction with the chapters of the book Hanna and Walter: A Love Story

. Each part is available separately but all together they make a powerful educational tool.

How can Voices of the Generations be used with our students, children, and grandchildren?

The book Hanna and Walter: A Love Story

, is separated into distinct chapters for Hanna and Walter. Hanna and Walter: A Love Story, is appropriate for junior high students and older. Additionally, the curriculum for the book follows the book with questions, activities and further links. Activities can be adapted for various ages.

The DVD of the half hour Television show can be shown as a family activity. Questions to tie in to the “This is Your Life” program include the original early timing of the show, the idea of a Holocaust story on a popular entertainment show, the difference between black and white and color, and the idea of a “happy ending.”

The video of Hanna Bloch Kohner on the This is Your Life program is available on YouTube.

The video can be seen here: