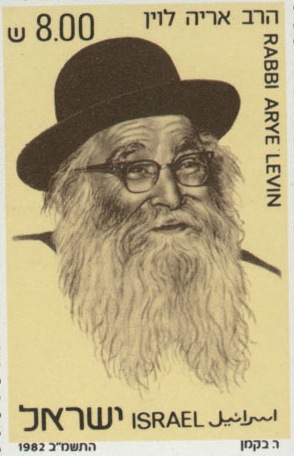 In honor of Yom Yerushalayim I wanted to put together resources on Rabbi Aryeh Levin, the prisoner’s rabbi and one of the first people who were brought to the Kotel in ’67. He was a very special man, respected for his humility, care of others, charity, treatment of others, how he valued others and his lack of concern or need for respect from others.

This year seems to be the year for Rav Levin the Begin center, Beit Avi Chai and the Russian compound sponsored a conference on Yom Yerushalayim relating to him.

A story specific to Yom Yerushalayim – going to the Kotel after the fighting. His grandson, R. Benji Levin, tells about going with his grandfather at that time in the video listed below on Arutz Rishon. In another article Rabbi Benji Levine speaks about his grandfathers influence on middot. An article on Hidabroot, additionally focuses on Rabbi Levin’s middot on his Yahrtzeit, on the 9th of Nissan.

In Hebrew- a program with Shlomi Goldberg on HaBait Hayehudi interviewing various individuals who knew or were raised on the stories related to Rabbi Aryeh Levin . This video includes an interview with Simcha Raz and Geula Cohen  among others.

12 Tribes films is making a documentary about him and has some exerpts on their site and on YouTube:

One of the Lamed Vav Rav Aryeh Levin

The Russian compound this is where Rabbi Aryeh Levin volunteered his services and time with prisoners and it has a room dedicated to him. See the link for more information and about activities there.

Maps of Jerusalem from when Rabbi Aryeh Levin lived there.

Toldot Yisrael has a video about blowing shofar after Yom Kippur at the Western Wall one year. Simcha Raz tells a similar story from Rav Aryeh Levin’s perspective in A Tzaddik in our Time. As soon as he heard what had happeed Rav Aryeh came  to help the boys feel less scared.