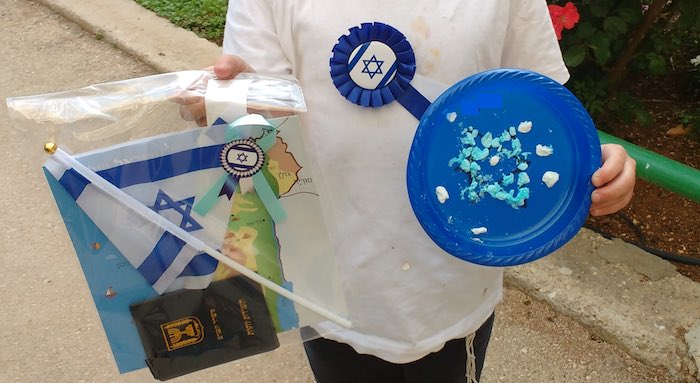 Yesterday my daughter shared her Yom Haatzmaut pop up card project that she made in school. Today my son wanted to share his own school project- a marshmallow flag. His gan/kindergarten had a falafel day for Yom Haatzmaut. Each child received an identity card with picture and information about themselves, a flag and a cute map with stickers.

About the ID Card

If you do not live in Israel the id card may not make sense, but each person over the age of sixteen had an identity card they carry around. Children are actually on their parent’s identity card until they can get their own. For children the identity card is both a way of learning about themselves, and makes them feel more grown up.

The map came from Hemed, which provides educational materials for the religious school system in Israel. The map had QR codes linked to a website where the children could play songs related to different locations on the map. This was a fun activity since there are quite a number of place based songs about Israel.

In addition, each child made an edible star out of blue and white marshmallows. My son really wanted to share his marshmallow flag project. He worked really really hard not to eat it so that I could take a picture of his work. Ok, he may have nibbled at it a bit but he was really proud of the flag and pretty much ran home so he wouldn’t finish it before I took a picture since he wanted to share it so much.

The children also got some wearable flags to pin to their shirts as well as symbols. Note the required blue and not-so-white for the occasion. Perhaps those are some red pepper stains from the falafel meal.