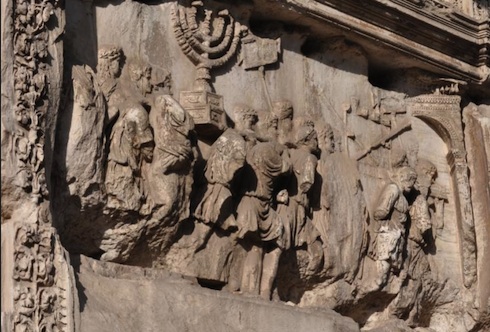 The depiction of the  Romans bringing the spoils of war, including the Temple Menorah and its vessels to Rome, on the Arch of Titus is a depiction that for many Jews symbolizes the loss of the Beit Hamikdash and of exile in their minds eye and in their hearts. This arch celebrated Titus’s victory over the Jews, the destruction of Jerusalem and the holy Temple, Beit Hamikdash. Because the stones had faded, the visualization has always been sort of white…until now. 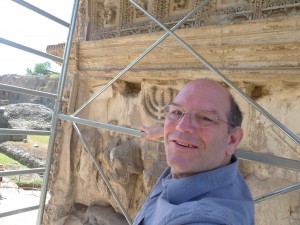 Last summer, Yeshiva University Center for Israel Studies , under the direction of Professor Steven Fine, and the Soprintendenza Speciale per i Beni Archeologici di Roma, along with scholars from all over the world, began a pilot study of the Arch of Titus focusing largely on the Menorah panel. During the pilot, the Menorah was scanned using ultra-violet spectrometry to see whether there was any signs of paint decoration. Guess what? There was! Scans showed yellow ochre on the arms and base of the Menorah. This is actually cool, because the Menorah is known to have been gold. 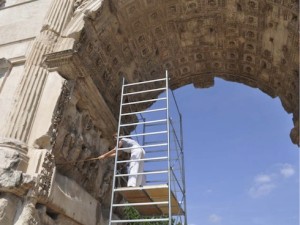 The team plans on creating a 3D scan of the Arch with accurate color representation and to add this to the Rome Reborn project, a 3d model of ancient Rome, under development by Professor Bernard Frischer, of University of Virginia.

It will be interesting to see what the group will uncover during their work. 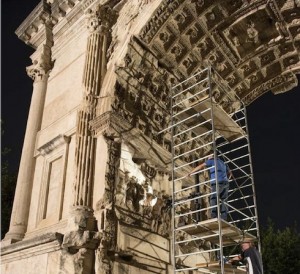 For more information about the project and the scholars participating in the project see the Arch of Titus Digital Restoration Project Page.

In addition, there are many discussions about where the vessels from the Beit Hamikdash are. Commentaries on Megillat Esther suggested that Achashverosh used them during his party. Dr. Fine has an interesting article, “When I Went to Rome… There I Saw the Menorah…” The Jerusalem Temple Implements during the Second Century c.e. which deals with various aspects of this question, which would be interesting to study during the three weeks or when studying Megillat Esther.

Photos Courtesy Professor Steven Fine (Note the third photo shows a preparator dusting the panel to allow for better scanning and the last photo shows actual scanning, which was performed both during the day and at night.