Ok maybe not in the soup but we did also doanimal crackers. My nephew’s bar mitzvah is this shabbat and the weeks parsha is Noach. Part of celebrating includes throwing candies (depending on the exact custom somewhere around the Bar Mitzvah boy’s aliyah to the Torah) and a kiddush. I asked my sister-in-law whether she wanted me to look for animal candies, and she liked the idea, but of course I couldn’t find any except gummy worms and gummy bears and it seemed to me that that wouldn’t quite cut it.

First I thought of doing a variation on animal cake pops (such as these cute lambs by Bakerella) using a non-dairy recipe and chocolate instead of candy melts because of the convenience factor. However, the weather where the Bar Mitzvah will be is hot! and all that chocolate likely would end up on nice white shabbat shirts and fancy dresses given the under 5 set tendency to wipe hands on their parents rather than on napkins.
Instead we came up with icing animal crackers. I also wanted to try animal sugar cubes based on this dollar store craft blog post. It seemed easy enough as it needed just sugar, water and a mold.   My helper was in on this. We started with the sugar project. Since I’ve never tried this before, I was not sure how it would turn out. The one cup sugar to two teaspoons water seemed to be fine. However, I think it would have been better to have bigger molds to make them in. Our animals are not as easy to guess as one would have hoped. My assistant also told me she was not overly fond of this project because it was VERY sticky, she ended up with sugar in her hair, and I think she didn’t much like filling the mold with the wet sugar. I think the over 3 range would not be bothered as much. I colored them (while she was sleeping) and tried store bought icing on some but I don’t know if these were the most successful project we have ever done. 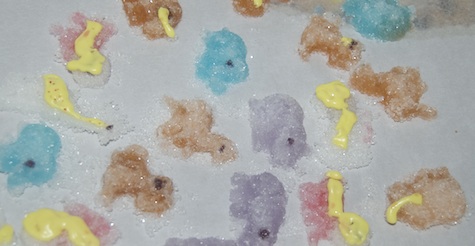 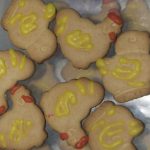 Project two was more successful as a parent child activity. My assistant liked making royal icing, coloring the icing, filling the pastry bag and holding the bag while we iced the cookies. I liked using store bought animal crackers, but if I had more time I probably would have looked for more variety of animals. Also if we had had more time I would have preferred icing the whole cookie and painting them afterwards with food coloring and I would have done a few more colors. As it is, maybe we’ll finish them with other family members later, if we think they’ll be useful.

The recipe for the Parve royal icing was a bit of an experiment but seems to work: