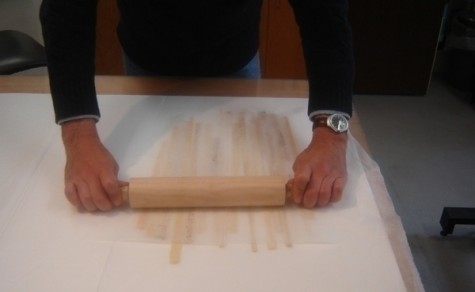 I thought it would be neat to link to some posts from the Brooklyn museum about papyrus this week since in this week’s parsha due to a famine Abraham and Sara end up in Egypt.

Apparently there is very little written about the process of how Egyptians made Papyrus, and pictorial depictions don’t really explain how the sheets were formed. The Brooklyn museum curators and conservators have been working on conserving a particular papyrus work in their collection, and as part of this work they have also been experimenting with creating papyrus and have a number of fun posts about how papyrus was made, their experiments and what was used to write on the papyrus.  The thumbnail is an object in their collection- reed brushes used to write on papyrus.

I like to follow their blog because of work I do in another area (digitization of cultural heritage) as they are extremely creative in this regard. However, their staff always has something interesting to say about a broad range of topics so I was really happy to read these posts.

Making Papyrus in the Conservation Lab by Caitlin Jenkins

Pigments and Inks Typically Used on Papyrus by Rachel Danzing

Papyrus: Secret of the Egyptians by Toni Owen

All images in this post have the following copyright: Copyright © 2004– the Brooklyn Museum and are used according to  their rights policy. Thumbnail image: Scribe’s Palette with 4 Reeds in a pen holder, #37.450E, Brooklyn Museum.