This weeks parsha is one of the places where the concept of sanctifying the first born comes up. Many years ago I was excited to have an opportunity to go to my first Pidyon Haben (although ironically  I ended up being able to attend three over a period of about three months.) Because I was studying Jewish art, I knew that the platter the baby is placed on, was in the past decorated with the Zodiac and Akedat Yitzchak (sacrifice of Isaac.)

I decided to make a Zodiac pillow case, but with a little humour since it was intended for a family who liked (and still like) penguins. 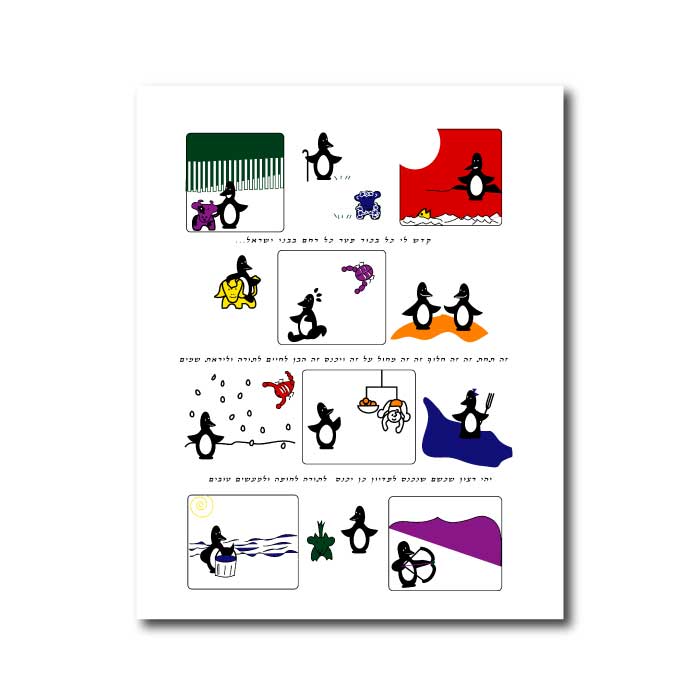 The text included is the first verse in this weeks parsha and some text from the Pidyon HaBen ceremony.

Pidyon Haben‘s are not so common, I don’t remember any particular customs from the three that I attended. However, a recent Pidyon Haben in the family has revealed some Chasidish customs which include draping the baby in jewellery and serving garlic and sugar. Sugar apparently is a segula for something or other. I’m guessing that the drapping the baby in jewellery has something to do with the fact that in the past the jewellery drapped were actually amulets. Ashkenazi and Sephardi families did attach amulets to babies in the past and I would imagine this ceremony would be one where familes would want to avoid ayin hara (evil eye.) The garlic and sugar seems to be related to having lots of guests and wanting to have enough food for everyone who wanted to participate. You didn’t really have to worry about those two foods spoiling.