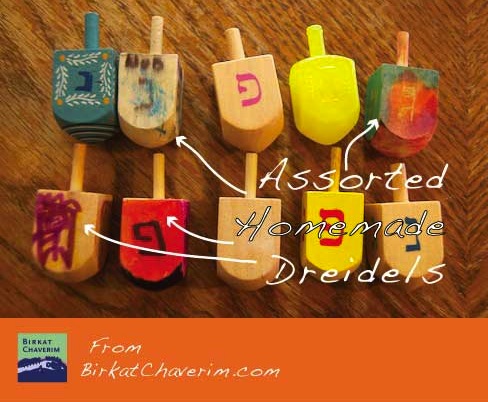 We are still playing dreidel tag. Our home made origami version did not come out so well (toddler ate it,) but we do have a few others to show. One of these(upper right corner) has been featured here before, but I still love it. I love how kids mix colors together to make such bold, bright artwork. My daughter made another one this year (lower row to the right), which is also bright and bold but was an attempt to sort of duplicate some of the other wooden ones we had around.

The top left dreidel was made by my son in his Montessori-style gan. What’s fun about this one is that it makes the dreidel game interactive and a moving game. For each Hebrew letter, there is an action word in English. For instance, Nod for Nun, Gallop for Gimmel and so forth.

The last one is my favorite because it involved initiative on the part of my daughter. I had reminder her that a while ago we had made storybook dice and asked whether she wanted to make storybook dreidels. She said yes, and I thought we would work on them later. About half an hour later, my daughter came to me and said “Look Ima!” She had made up her own story dreidel with scenes from the Hanukkah story. If I had made them with her, I probably would have made more than one with a variety of types of symbols, but I really like the one she designed. Her four scenes were:

I thought that was really cute. It is actually quite interesting telling the Hanukkah story using just four pictures. Here’s a view of the oil jug: 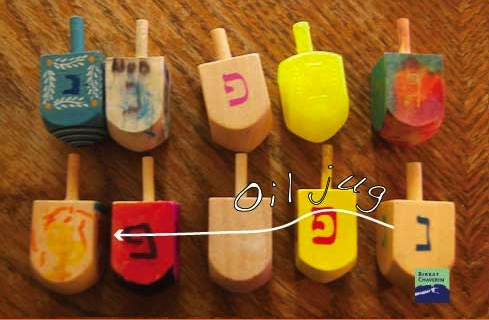 Maybe we’ll add some more scenes on another dreidel. I still have a whole stock of undecorated dreidels so the possibilities are endless.