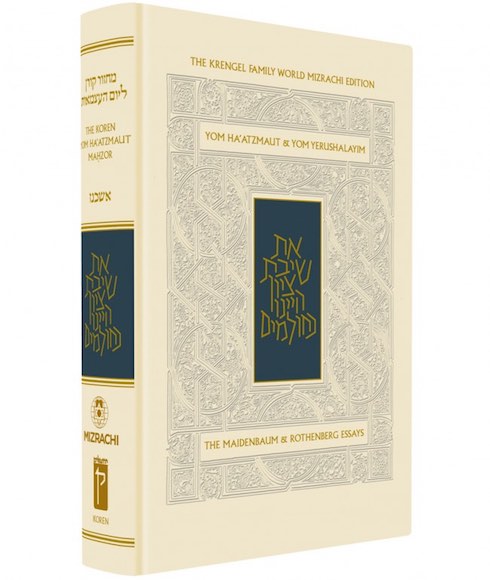 It makes sense to have a review of the World Mizrahi Koren Mahzor for Yom Haatzmaut and Yom Yerushalayim on a site that was created to support a fundraiser for Mizrahi’s youth movement, Bnei Akiva. There are all kinds of good things about this mahzor. The main purpose of the mahzor is to have an organized collection of the prayers said by most congregations for Yom Hazikaron, Yom Haatzmaut and Yom Yerushalayim. In the commentaries near the prayers are discussions about issues that come up with these contemporary holidays- can one say Hallel?

Can one shave during the omer? Who has discussed these issues?
There are also interpretations or focuses on concepts that are relevant to the contemporary state of Israel such as a discussion of the concept of monarchy and rulership when discussing Et Tzemach David Avdecha May the offshoot of Your servant David. This is a lovely addition as it both emphasizes the day and allows the user to delve differently into prayer texts that he or she may think about by rote.
I was interested to see the al hanisim by Rav Neriah z”l included. Rav Neriah wrote the Bnei Akiva anthem and although I grew up in Bnei Akiva, this was the first time I saw his al hanisim prayer. I would have liked to see more information about this and the alternate versions included in the mahzor. We do not have an al hanisim for Yom Haatzmaut and Yom Yerushalayim included in the Bnei Akiva bencher. Like the mahzor, We do have Harachaman’s for Israel and soldiers.

The mahzor includes a selection of religious Zionist essays. Some of them delve into issues related to the Tefilla for Yom Haatzmaut or Yom Yerushalayim. Others are historic essays or essays raising various issues and useful both for educators and individuals interested in focusing on the days. I will not talk about all of them but just touch on a few of them.

It is interesting to read Rav JB Soloveitchick’s “Six Knocks” today. It was written in 1956, and refers to the lover knocking in the Song of Songs, the metaphor of the children of Israel and God, to extrapolate six contemporary knocks. Reading the sixth knock which refers to the knock of beckoning, of open doors to Jews that need a place to go, I could not help but think of how relevant this still is today, especially when I see all the Jews coming to Israel from France and Belgium. Rabbi Sacks touches on this as well in his essay where he also discusses that while there have been empires that controlled Israel, Israel is not empiric but rather is interested in survival.

Rav Shaul Yisraeli z”l’s essay brings the famous Kamtza and Bar Kamtza story in the context of religious Zionism. He relates to Rabbi Zekharia ben Avkulas’s humility which, in the version of the story in Lamantations Rabba, is blamed for the destruction of the Temple (visit this link to download a children’s version of Kamtza and Bar Kamtza story.) Rav Yisraeli posits that part of the problem was the rabbis removing themselves from the ordinary people, not recognizing the importance of everyday matters and consequently laying the groundwork for the destruction of the Temple.
There is a contribution by Rabbi Eliezer Sadan, who received this years Israel Prize. I personally enjoyed the historal essays, for instance, I enjoyed learning from Rabbi Shmuel Katz’s essay that the initial design of Yom Haatzmaut included giving tzedaka. I would have loved to have seen more bio information as a lay reader would likely not know who all the contributors are.
As a side note, since we have a tendency towards thing simcha celebrations, I enjoyed reading Rav Riskin’s story about wearing his Bar Mitzvah suit in 1952 to the Klausenberg rebbi’s shul to enjoy daven with the congregation of Chasidim. It is a powerful story, which I can not give due justice to here, but the gist is that after making the reader read the Torah portion of the Tochecha (curses) aloud, stated with emotion that the congregation had already received the curses and were ready for the blessings, moving the congregation to tears. He proceeded to tell the congregation that they would find the blessings in Israel. We have our own stories with the Klausenberg rebbi, a family member who used to cook for his yeshiva, would have appreciated this story. She always spoke about her own yearning for Israel, or “Eretz” before moving to Israel from Romania.
This is definitely a useful resource.