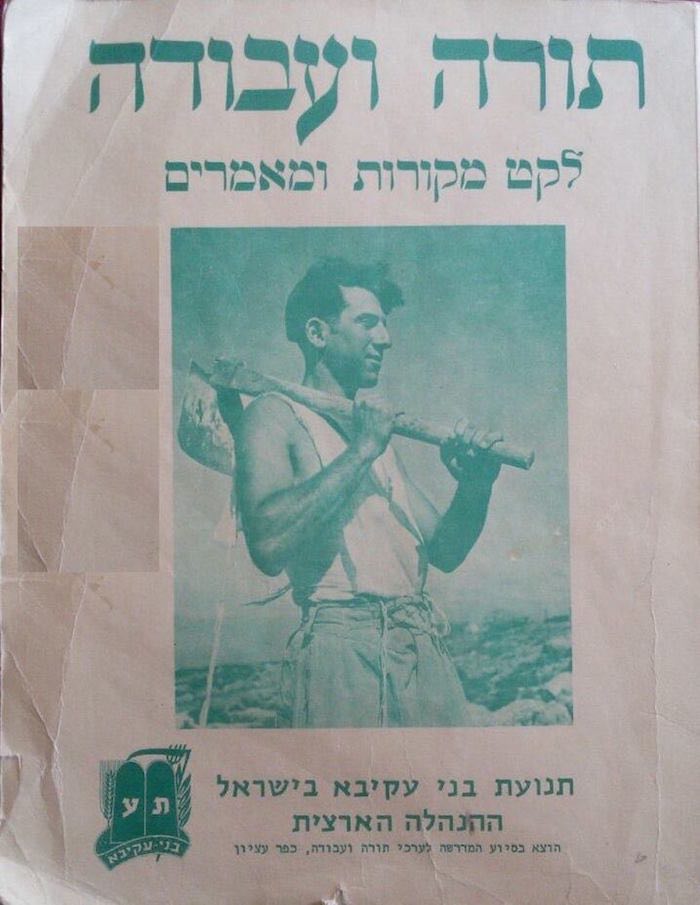 Recently my friend David Curwin shared this post about David Daube on facebook and I felt that given Birkat Chaverim’s connection to Bnei Akiva, and informal education, it was appropriate to share here. I thought David’s commemorating David Daube was thoughtful as well as interesting to those who grew up in Bnei Akiva as well as a note to how educators can impact students. Thank you David, for allowing me to share this.

I don’t know how many people today recognize this book (the cover linked above), but from its publication in the 1970s until my exposure to it around 1990 it was the guidebook for the ideology of Torah V’Avodah as promoted by Bnei Akiva and fulfilled by Kibbutz HaDati. The young man pictured on the cover exemplified that ideology – tzitzit blowing in the wind, working the land.

When I attended Yeshivat HaKibbutz HaDati in 1990, I met the man on the cover, David Daube. Daube (everyone called him by his last name), had been a member of the original Kibbutz Ein Tzurim in Gush Etzion, was captured by the Jordanians in the War of Independence, and then went on to found Kibbutz Ein Tzurim, the host of our yeshiva.

Daube was the menahel (director) of the yeshiva, and even though decades had passed since the famous picture was taken, he continued to represent the ideas and ideals of Torah V’Avodah. He was passionate about Torah and mitvzot, and was an active member of his kibbutz.

Today I heard the news of Daube’s passing. This week also marks the 10th anniversary (20 Sivan) of the passing of Reb Mitch Heifetz, a Bnei Akiva educator par excellence and also a teacher in Yeshivat HaKibbutz HaDati.

I can’t exaggerate the significance and impact my time spent in that yeshiva had on me. The breadth and depth of my interest in Torah, my willingness to question all assumptions, and my compulsion to integrate daily Torah study with my busy working life are all products of my time there.

I attended the yeshiva from 1990-1993, and it sadly closed its beautiful doors (you’d know what I meant if you’ve seen them) in 2008. While the voice of the yeshiva is by no means silent (both in terms of the impact its graduates have on Israeli society and the success of its sister yeshiva on Maaleh Gilboa where my son is studying), it is certainly saddening to watch the generation of those founders pass on.

May their memories be a blessing – the blessing of Torah V’Avodah.

Thank you David for commemorating David Daube and R. Mitch so beautifully. You can read more of David Curwin’s writing at Balashon and Times of Israel.

To hear more about Rav Mitch you can see our review of his haggadah, HaKol Baseder, on our site, and a tribute to Rav Mitch on the website of Neemani Torah VAvodah in Hebrew.

You can read a bit about David Daube’s part in the War of Independence on the Gush Etzion heritage site. There are also some home Youtube videos in Hebrew about his experiences as well.