The symbol of the Jewish month of Tishrei is moznayim, libra, scales (see for instance the symbol from the Beit Alpha synagogue to the left.) This symbolizes the judging that occurs on Rosh Hashana and Yom Kippur.

As a kid I can remember making a scale where we would put mitzvot (commandments/good deeds) on one side of the scale, and on the other side we would put sins. Of course we wanted to work hard so that the good deeds outweighed the bad deeds. I wanted to do something similar with my daughter and I had been thinking about what I could do, when I saw a post on Filth Wizardy on how to make scales from home made materials. I decided that the idea of the hanger scale would be perfect for us. Here’s our version: 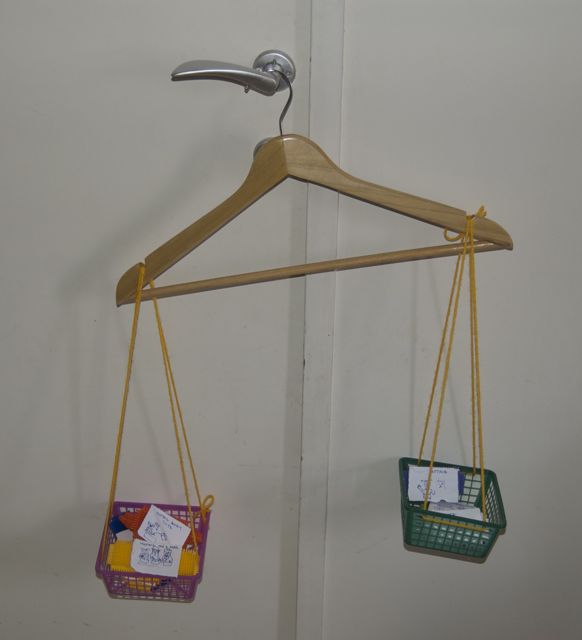 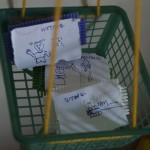 Our version uses the containers that mushrooms come in and has a modification in that we (for the moment at least) are not interested in comparing weights of things around the house, but in conceptualizing weighing the good and bad things that we do. I made a bunch of little pictures with mitzvot and sins on them, cut them out and taped them to “sabras” a type of prickley lego toy. 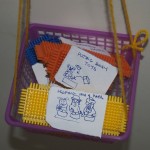 You can see that the bad deeds are things like hitting and biting and that there are fewer bad deeds than good deeds. Good deeds are things like helping parents, putting toys away, prayers etc. When my daughter saw the scale, she was more interested in the fact that the baskets with strings attached made great shopping baskets. I did explain the concepts and we put some deeds in each basket to see what would happen. Then she took over the baskets for shopping. She did, however, bring me one of the sins with a worried expression “Hitting, Ima!” Later maybe we’ll also use this as an actual scale.

You may be interested in making shoes/ slippers for  Yom Kippur too.