I forgot to mention that although baby and kids socks generally are too small for Build a Bears, they do make great appliques. The girls were quite creative in what they wanted to use in their designs. The second week, some of the girls finished up their projects from the week before. One girl decided to bring in felt to make a dress and headdress (no pictures, she already took it home.) 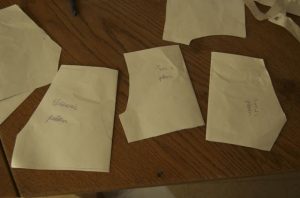 The rest of us started to design our own patterns for Build a Bear shorts. I showed them the shorts I had made for my daughter and the little applique I had topstitched onto them. I also brought out a bunch of her clothes, because baby and toddler clothing always have such cute embellishments and I thought it would spark ideas. I brought out several pairs of shorts so we could look at how they were constructed. Then I brought out paper. We looked at the shorts and estimated how much smaller we would want them to be. We also estimated a length and where the crotch should be. Then we designed the cut for our shorts. In the first pattern we forgot to add seam allowance, but we kept that in mind when we measured the fabric. The other patterns included seam allowance.

Then we got to measuring our patterns against old tshirts. What I love about this is that given the girls are not in love with a huge amount of hand sewing, we save time on the hem and sides of the pants.

We opened the pieces and pinned them together. The idea is for the girls to sew the center seams and then open the pants again and sew up the crotch.