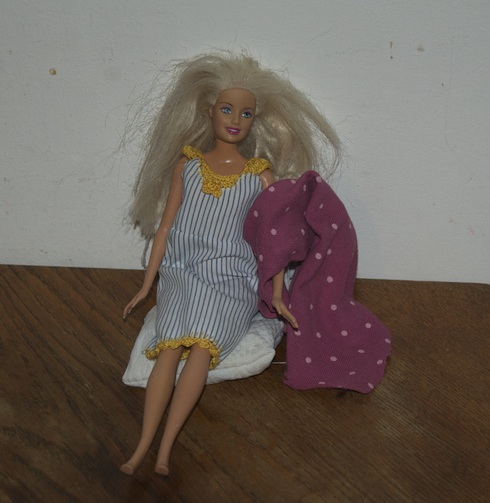 In the summer I mentioned one of the mother-daughter projects on our list was to sew something. My daughter decided she wanted to make a nightgown for one of her Barbie dolls. I admit I probably would never have bought these, but she received three hand me down Barbies from my nieces and we do like to keep them clothed. I thought we should try and do something sort of B’Tzniut (modest). I can’t say this turned out like a night gown I would wear in public, but it does have sleeves and is longer and less tight than most of the Barbie clothing we’ve seen.
The dress design was loosely based on this pattern with a bit of trial and error tweeking. It is meant to be loose, not fitted. My daughter learned blanket stitch and did some straight sewing. I did the crochet and lots of the other sewing. The crochet edging brings the nightgown below the knee and sort of makes cap sleeves. We used an old ruined shirt my husband donated to the cause. My daughter was pretty pleased and it gets lots of use. I thought about crocheting slippers but then I thought- who am I kidding? Slippers are going to disappear immediately after I make them. Instead we’ll move on to some more clothing for other dolls and maybe some less fragile shoes.