We have touched on the use of comics to teach Jewish values in Mitzvot Unplugged posts in the past. Aartist Isaac Brynjegard-Bialik uses comic books in his papercuts and in his workshops. Flora Rosefsky’s mentoree,  Adam, created a Purim costume for a super hero, and we talked about one of my favorite comic books about Rabbi Arye Levin in another post.

Besides being great fun, comic books and graphic novels are great for addressing different learning styles of children and for exploring topics in a non-frontal, informal manner. I know I use them to get my children to read in English and to look at various topics, informally. My 5 year old has been obsessed with superheros since he was about one and had no idea what they were. These days we frequently have discussions about what is a hero and who is a hero both with and without a comic character in front of us. 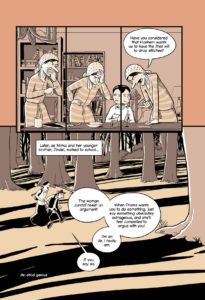 This is one of the reasons I was pleased to see Barry Deutsch’s Hereville series. Hereville has an unusual, aspiring hero, an ultra orthodox/charedi girl named Mirka. She wants to be a hero and fight dragons. Ultra orthodox is a fairly broad descriptor. Mirka’s family lives in a secluded community similar to New Square, although she is unlike any Square woman I know. She does not have time or patience for her everyday responsibilities (setting the table, learning to knit, babysitting or school.) In the first three books (I assume there will be more,) Mirka confronts a troll, a magical meteorite, and a magic fish. Not your typical antagonists for a story centering around a charedi girl.

What I like about the series is that there is that bit of magic, which any child can relate to, a religious community, and that Mirka is a fairly ordinary girl who happens to be religious. She is a flawed character who succeeds, not due to physical strength but mostly through ordinary skills and values such as understanding the other, debating, and caring. Sometimes she succeeds just by being herself. I think these issues provide many jumping off points for consideration. 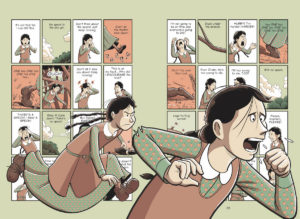 Saving Hereville, Conversation with self and God Book 2

Mirka feels real and is someone a child can identify with. Her stories are great for exploring character traits and issues of commitment and responsibilities. I like the unusual conflicts and the antagonists. The antagonists are not terrifying, some are actually quite witty and humorous while causing conflict. I like a female religious character- we have read quite a number of graphic novels with female protagonists but none with  religious female protagonists. 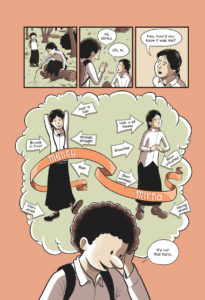 I love how Deutsch points out cultural nuances, the quality Shabbat, or a character’s thanking God for her family and a few minutes rest. The vibe reminds me of My Name is Asher Lev in how the connection or communication with God is relayed. I also like the interactions between siblings and step-siblings. It is very real in how children can go from deep caring, to feeling annoyed, and then back to deep caring about family members.


Mirka’s community does not quite fit with the communities of charedim that I know, although I could see it existing somewhere. All the charedim I know, especially the women, would know what a pig or a rocket ship is. In a time where publications like Mishpacha magazine filter world events and science, I would expect knowledge of these things, if not interest. I do not think Mirka’s siblings would have called their mother/stepmother’s upbringing  “modernish” (book 3.) I think they probably would describe her as “awek fun wei/ avek fun vei” or off the path. 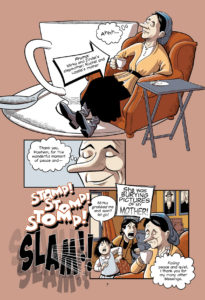 Thanking Hashem for Peace and Quiet

I would love to see questions to a rabbinic authority regarding the witch in future books as well as  pashkevil’s (religious communication broadsides) here and there. There are some other technical points that I would not expect in a Square-like community, but they ultimately do not detract from the stories.

Visually the books draw you in. I particularly enjoy the panels where Deutsch makes contrasts like comparing distinctions between girls. There are many things that would be harder to do in words that work so well in his illustrations.


My children and I have enjoyed the books. Recently too, my daughter’s friend who is often over playing on shabbat has been urging me to finish this review so she can borrow them. Since I took longer than she liked, she has been borrowing them to read here.

Cartoonist, Barry Deutsch does school workshops, both in person and via skype.

Hereville: How Mirka Got Her Sword

Hereville: How Mirka Met a Meteorite

My kids also tend to like the the comics and graphic novels of Shai Charka, whose works are almost exclusively in Hebrew. These are very different from the Hereville series, although some also include magic and allegories in a nonchalant manner, such as when his Baba character goes to hunt the Leviathan. Charka’s magical creatures tend to be anchored in midrashic texts. These works are also clever, humorous, and an opening for exploring traditional texts. They have a very different feel from Hereville .

Interestingly, as I started writing this, I got an email about a conference connected to the traveling exhibition Graphic Details: Confessional Comics by Jewish Women opening at the Negev Museum of Art. The presentation by curator Noa Lea Cohen touches on comics by charedi women geared towards charedi girls and their mothers. Something to explore further.

This is obviously not an exhaustive list of graphic novels that can help families teach Jewish values. I would be interested in hearing about ways you use comics and which ones you find impactful.


Why Teach with Comics | Jennifer Haines 2012 Reading with Pictures

The First Kosher Comic Book Blazed a Trail for Orthodox Outreach | Marjorie Ingall July 24, 2014 Tablet Magazine (About Mendy and the Golem, a comic I liked as a child.)