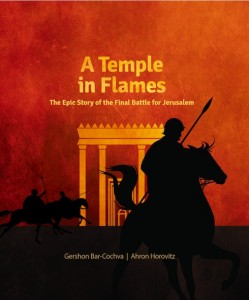 I meant to review this in the summer during the 9 days, but given what was going on then, I found it too heavy to review this book. That is not to say that I did not find it to be interesting and a useful resource, just given its subject matter, it was too difficult.

The tenth of Tevet seemed an appropriate time to review it. I know that The Temple in Flames- The Epic Story of the Final Battle for Jerusalem by Gershon Bar Cochva and Ahron Horovitz, focuses on the destruction of the second Beit Hamikdash or Temple and the 10th of Tevet relates to Nevuchadnezzar’s siege of Jerusalem during the time of the first Temple. However, many of the dates related to the destruction of both Temples overlap.

In any case, I found this book to be very useful to studying the time period, both with children and as an adult. My kids, who are still too young to read this, were fascinated by the illustrations in the book and asked questions about the Roman soldiers, military technology, as well as the various illustrations, maps, and materials in the book. My daughter flipped through on her own and would ask questions from time to time. It was interesting for them to see the Roman soldier costumes and formations.

I found the new archeology finds, such as those that probably indicate rebels trying to escape in the drainage system, to be  interesting and an asset to the story telling. I can only comment on that as a lay person, it has been a long time since I took any archeology courses and therefore can not comment on nuances about that.

Suffice it to say, I found The Temple in Flames  helpful to me in understanding what happened leading up to the destruction of the second temple. I also felt that the book got across the in-fighting that occurred at that time period, so that one could understand the Talmudic saying of Sinat Chinam, senseless hatred, destroyed the Beit Hamikdash, Temple.

I would recommend this book as a teaching/learning aid. I think it would also make a good Bar or Bat Mitzvah gift.

This book was published by Magid Books and Megalim (City of David Institute for Jerusalem Studies.) In addition to the authors, Dr. Eyal Meiron, of Yad Ben Tzvi served as the academic editor.