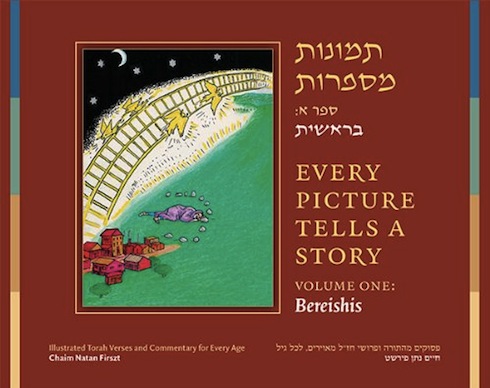 My daughter has been mentioning that her school, which is not in walking distance, is having learning at ten at night for students at the school for Shavuot, including for the first graders. She wanted to learn Torah too so I told her she could use the two “Every Picture Tells a Story, Volume One: Bereishis

” and “Every Picture Tells a Story, Volume Two: Shmos

,” from Menorah books which we received for review. These are the first two books by Chaim Natan Firszt and illustrated by Emil (Yaakov) Grunberg in what will be one volume per book in the Torah. These are intended for children. They highlight selected psukim (verses) with erudation based on Torah that the author had learned with the Belzer Rebbe in Montreal many years ago. These books are technically reprints, as they were originally printed in an coil bound format. However, Firszt revised and edited the texts working with Rabbi Shlomo Aschkenazy of the Belz Kollel in Har Nof.

Having Jewish books geared towards children is an important way to teach them Jewish values. Materials that speak to the child makes it more likely for him or her to ask questions and engage you with the material. It is a great way for a parent to reexamine topics as well as children tend to ask questions that seem simple on the surface but are more complex when you examine them.

Usually, for the weekly Parsha or Torah portion, my kids tended to like using resources such as the Parsha sheets from Mibereshit and The Shabbat Book: A Weekly Guide For The Whole Family

by Joyce Klein. Both of my kids were very happy to add these books to support how they learn. My daughter (who is in 1st grade) actually wanted to take the Breishit volume to school, since she is currently learning Parshat Noach and keeps asking whether she can have the books. My son has been happy to bring the books over for me to read to him.

I asked my daughter what she liked about the two books by Chaim Natan Firszt, and she said she liked the pictures, in particular, how the animals are depicted in the story of the creation of the world. She did also read the psukim and commentary, in Hebrew. However, because there is no nikud, this required an extra effort. The English is also still too hard for her to read herself. The books are easier to read in Hebrew than in English and while I did not read all the commentary or examine all the illustrations, I found some commentary and illustrations which were useful in teaching my kids or answering my kids questions. I particularly appreciated illustrations in Volume Two related to building the mishkan and choshen (breast plate) worn by the Kohen Gadol (high priest.)

These books have an additional  feature of coloring books, which we did not receive to review, but which could be useful.

I should note that the Chasidish learning included in the commentary, can also be noted in some of the illustrations as well as by the fact that there are approbations (haskamot from Rav Pinchas Hirschprung z”l of the Montreal beit din and Rabbi Moshe Halbershtam z”l of Badatz Eida Charedit for the original edition).

There were some instances of what might be viewed as anachronistic illustrations, but are more likely artistic interpretation. I can relate to this, as I have done depictions of Avraham and the angels as well as Kamtza and Bar Kamtza, among other stories, in a somewhat anachronistic manner. My kids, having very little interest in things like that, only noticed this in relation to how soldiers are depicted in some illustrations. Otherwise, they overall enjoyed how the stories were visually interpreted and using these books for learning.

This is a good way to finish up this years Mitzvah Unplugged Series. If your kids have any favorite learning books please do note them in the comments below.