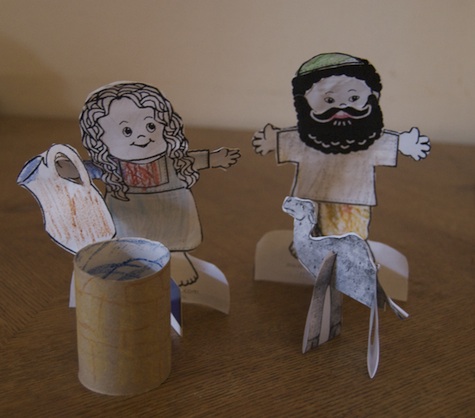 Wanted to give an update on the Rivka/Eliezer/camel paper craft from the previous post. This was actually a very successful project. So much so that my daughter did not want to go to gan so she could finish it, was waiting to leave gan and raced home from a chug she ordinarily refuses to leave, in order to finish this project.

The hair and clothing were chosen and colored by my three year old. I had wanted to put tabs on the clothing so we could change them but she preferred gluing them on permanently. She really enjoyed hearing the story again and again while we were making the dolls and wanted to make more camels as well as Yitzchak. I suppose we’ll do that at another time.

We did not do the juice box well in the end, but did recycle a toilet paper roll instead. I think it could be a little shorter but it works. We didn’t do a pully system, probably because I keep thinking about the Eastern European medieval style wells which used a lift system (for some reason I’ve been thinking about El Lissitsky’s Chad Gadya, which has a depiction of one of this type, all week, but my copy of the reprint is in storage so I couldn’t pull it out to look at.)

We will probably make more dolls at a later date for other stories.