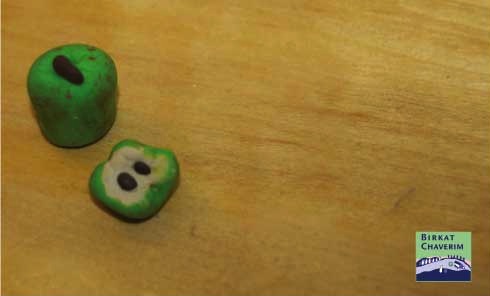 Over the summer we worked on dollhouse apples. That is dollhouse sized apples using fimo clay.

We used “panda” oil pastels to color the outsides of the apples for more realistic tones since apples are never only one shade. The half apple was made by first wrapping white fimo in green fimo. We then made sure that the combined fimo was shaped into a ball. We subsequently cut the ball in half. We then made two indents with a pen and stuck brown fimo into the indents.

They aren’t perfect but are perfect for a child’s doll house. With more practice and patience you can make fancier apples. I could imagine these also being used for napkin rings on Rosh Hashana. Can be made with children aged about seven and up.

My kids have been re-designing their dollhouse. My daughter showed me where the MMD/safe room is, although she pointed out that it was not a very good safe house since it has windows. These apples have been placed in the kitchen.

We made other items for the dollhouse, including a sleeper futon.