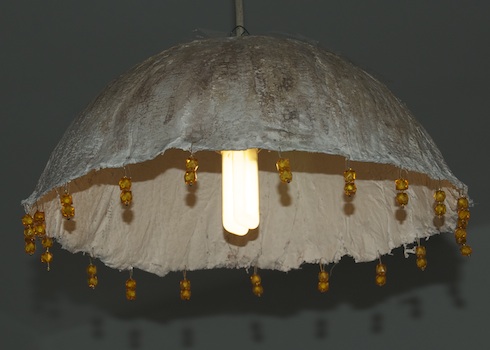 I don’t know why I never posted this. When we moved into our current apartment, we noticed that none of our light fixtures had shades. I figured, we could probably come up with some on our own. Have you ever noticed that it often takes more time to think about what you’d like to do than to actually do it? Thats the case for most of the lamp shades which I designed in my head, but this shade did actually get made.

I will admit that we made one before this, out of string, which was a complete fiasco. This one, however, was a great project on many accounts. First of all it was a perfect project to do with my daughter. We used kid friendly materials and the technique was easy enough for her to do and to take responsibility in doing. it also used stuff I already had at home (except for the large plastic bowl, which I found on the street and decided would be the right size and shape for the project.)

We used plaster gauze strips, which I’ve had for like a thousand years, beads and jewellery making head pins, and paint. Basically i marked off a section where we would not put strips. We cut the gauze up, wet it and plastered them all over the big plastic bowl. We let that dry and then added another layer or so. Then we painted the outside of the plaster covered bowl with goldish paint.

Once that was dry, we took a safety pin and made holes around the rim of the bowl. I measured and marked where we wanted to hang beads around the shade and then pocked the marks with a safety pin. We probably could have skipped the safety pin part.

We put together a bead pattern and then put the beads on lots of the head pins. Then we stuck each of those hangers into the holes around the rim of the plaster bowl. Each metal piece was folded over to keep them in place. Then we attached it to the light fixture. I admit to being a bit lazy in my attaching method.

We’ve been happy with it so far (and even gotten some compliments.) I would still, one day, like to make one out of glass bottle mosaic, but i think that will have to wait a while.