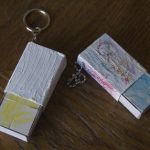 One of the girls in the chug (class) brought in slices of a cereal box to use as game pieces for her game. I liked that idea and used it with my daughter to make a travel game for my older niece who is a camp counsellor this summer. It had to be something that would a.fit in a matchbox and b.easy enough for a three year old to contribute. I remembered the beautiful slotted building discs by Joel Henririques and thought that would be perfect for what we wanted to do, although in a modified simple fashion.

We basically cut rectangles out of a cereal box (ordinarily I would have used a papercutter but i lent mine to someone) and cut slots on each side. My daughter participated in some of the cutting. She mostly enjoyed decorating the cards and the matchbox. She probably spent an hour deciding on the colors to use, lining them up, decorating the matchbox and placing them inside the box. We then put a small hole in the matchbox in order to add a keychain. We made two in the end. We also used craft punches for variation on some of the cards: