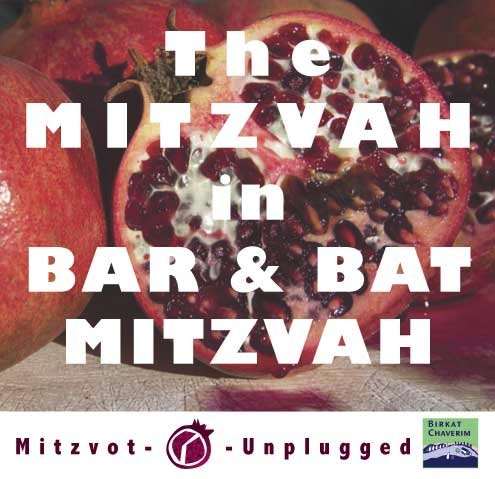 We are happy to have a guest post by Marcia Goldlist as part of Mitzvot Unplugged, discussing using her Bible in Rhyme series as a way of teaching Bar and Bat Mitzvah.

A common question asked of b’nai mitzva is, “What are you doing for your bar/bat mitzva?” Everyone knows that what people really mean is “What kind of party are you having?”. But, the question and the answer to this question really is not about the bar or bat (the boy or girl), but rather about the mitzva.

One way to discuss this is through my, Enjoying Exodus: The Bible in Rhyme

, or Exodus in rhyming couplets. This is because it is different, and kids (and adults) listen and think about “different” more thoroughly than what they would “the same”. Don’t just talk to your child, talk with your child; pay attention to the conversation because you will have a better conversation – which is priceless – and you may just reinvigorate your own commitment.

A starting point could be to challenge your child to think about the difference between the last plague that God brought upon the Egyptians and all the others. You may want to read together all of the plagues (Shmot/Exodus 7:15- 12:30) but you could also just use the instructions that God gave before the last plague in Shmot 12.

Speak to the entire assembly of Israel and say,
‘This month on the tenth day
A lamb or a kid each man should take.
One for each household to partake.
If for a lamb or a kid a household will be too small
Then with a neighbor they should take according to the number so that there is just enough for all.
You should have an unblemished male lamb or kid that is a year old,
And of which, from the sheep or the goats you take hold.
It will be yours to examine it
Until the fourteenth day of this month to see if it is fit.
The whole assembly of Israel together will submit
At noon to slaughter it.
Of some of its blood they should take hold
And place it on the two sides of the door frame mold
And on top of the door frame they should put a bit
On the houses where they will eat it.
On that night the meat
With matzas, the unleavened bread, and bitter herbs they should eat.
Partially roasted you shall not eat it.
Nor boiled is it fit.
Only roasted over a fire are you to eat the spread
Of inner parts, legs and the head.
Do not leave any of it until morning – eat it all before you adjourn.
What is left until the morning should in a fire burn.

And this is the way that you are to eat
The meat:
With a belt fastened on your loins and shoes on your feet.
With your staffs in your hands quickly you are to eat.
This is a Passover offering to God so be swift,
As to God it is a gift.
“I will go through the land of Egypt on this night
And I will kill every firstborn in the land of Egypt outright.
Both animal and man.
And the gods of Egypt I will judge – I am God and this is My plan.
The blood will be a sign marking your houses for Me to view,
So that I will pass over you,
When the land of Egypt I will pass through.
The plague will not be upon you.

The answer to how this plague is different is that for all the other plagues God gave us a freebie. We didn’t have to do anything. We were saved just by the fact that we were the children of Israel. Now, God asked us to help save ourselves. This also mirrors the child becoming a bar/bat mitzva. The child is now responsible for him/herself. There are no more freebies. The child is now asked to act as a part of the Jewish people.

Would you Have Taken Part?

A question you could pose to the new Jewish adult could be, “Would you have been part of the ceremony to kill the lamb and put the blood, as prescribed, on your door post?” Remember that anyone that took the prescribed actions were spared the tenth plague. If you decided not to due to lack of belief, laziness, or any other reason, you would not have been spared from your first born being killed. Express your inner thoughts why you think you would and why you may not have gone along with the requirements. For more questions and activities related to these verses check out this Enjoying the Bible Online post.

On Shavuot, we, the children of Israel, had another test which we passed with flying colors. In Shmot chapter 23 we are told that all Bnei Yisrael accepted the laws of God together.

Moses came in front of the nation
And all the words of God and all the laws he told in oration.
The entire people responded with one voice,
“All the words that God has spoken we will do by choice.”

And on the next day when Moses conveyed the laws given by God:

He took the book of the covenant and read it aloud.
Then the people vowed,
“Everything that God did say
We will do and obey!”

Again, we need to ask if we – parents and child – would have answered affirmative. If not, what would have happened? And if yes, do we reaffirm that same conviction today?

Don’t just answer with yes and no responses.

Think out what would make you accept all the laws and what would have been difficult.
Discuss the amazing accomplishment of all the children of Israel being unified. Perhaps there are things which your child could suggest to help unify the Jewish people.
But most of all, listen and talk to your children about what it means to be b’nai mitzvah!

The following are a few easy ways to make the mitzva part of b’nai mitzva more meaningful: