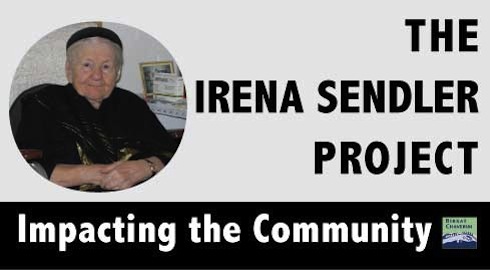 In the Jewish World celebrating Bar Mitzvahs and Bat Mitzvahs often involves encouraging a young person to accept a new responsibility or to embark on a new project. Sometimes these projects are short affairs that allow the youngster to fulfill his or her obligations to the task at hand but other times such endeavors can have a tremendous impact on their entire community and beyond.

One such project occurred in 1999 when a group of Kansas schoolgirls were challenged to research an unsung hero of the Holocaust. The girls, with almost no access to the Internet tools that we take for granted today, heard a rumor about a Polish woman who had saved over 2500 Jewish children from the Warsaw ghetto. They followed up on the rumor and uncovered the amazing story of Irena Sendler.  Sendler had been honored as a Righteous Gentile by Yad Vashem in 1965 but her story was not widely publicized until the school project created the interest that allowed the story of Irena Sendler to develop into a book, a performance and most recently, a website.

Irena Sendler was a young social worker in Warsaw when the war broke out in 1939. She joined the Zagota underground which dedicated itself to helping the displaced, impoverished and persecuted Jews of Poland. When Warsaw’s Jews were interned in the Warsaw Ghetto Sendler was determined that there were still actions that she could take to save lives.

Sendler obtained false documents that identified her as a nurse and allowed her to pass back and forth from “free” Warsaw into and out of the ghetto. At first she brought in food and medicines but as time passed she began to devise plans that would allow her to take children, who could be more easily transported, out of the ghetto and into freedom.

Sendler and her Zagota colleagues arranged to smuggle the children out of the ghetto, sometimes under garbage or in carts under vicious dogs who had been specially trained to bark at the sight of a German guard.  Sendler often sedated the children and hid them in bags and toolboxes or under tram seats. Sendler identified orphans who were living on Warsaw’s streets and smuggled them out but she also appealed to parents to allow her to try to find hiding places for their children on the other side of the ghetto walls. These, Sendler later told her interviewers, were heartbreaking conversations as she tried to “talk the mothers out of their children.”

When a child had been successfully smuggled out of the ghetto Sendler and her other Zagota friends took responsibility for finding a suitable hiding place for the child in a convent or in an orphanage or amongst a sympathetic Polish family. Sendler recorded the names and hiding places of these children and she secured the papers in glass jars which were hidden in her neighbor’s garden.

In October 1943, after the destruction of the ghetto, Sendler was captured by the Germans and imprisoned. She endured Nazi torture without revealing any information about the whereabouts of the children. She was scheduled to be executed but the Zagota underground was able to secure her escape and she lived out the rest of the war years in hiding.

The Birth of the Irena Sendler Project

The story of Irena Sendler would have remained buried. However, in 1999 a Uniontown Kansas Social Studies teacher assigned his students to learn something about the Holocaust. Four young girls developed their project about Irena Sendler into a huge exhibit.  Thanks to the tenacious research of a few schoolgirls, her story has today reached millions.

Laurie Rappeport has been living in Safed for almost 30 years where she has been involved with tourism to Safed, encouraging visitors to come and explore the beautiful mountaintop city. Laurie is also involved with online Jewish learning that brings contemporary Jewish learning to North American students in day schools, afternoon schools and even an online Hebrew School environment. She can be found blogging at her blog, Safed blogspot.