For Mitzvot Unplugged I wanted to include this letter to a soldier activity I put together for my daughter’s English class.

We have been blessed to have family come over the years to Israel for a “gap year”. In the last year or two we had a cousin learning in Kerem B’Yavneh and were lucky enough to have him and his friends as visitors. First I have to say that I am extremely impressed with the young men who learn at Kerem BYavneh. They are thoughtful, kind, patient, smart and great guests. We were always happy to have them around, even if they were only crashing for the night or a few hours. Anyone who is patient enough to teach chess strategy to an 8 year old, read all of Captain Underpants out loud, really listen to small children and evaluate what they are saying, cut down trees and help with a sukkah and help clear the table wins super brownie points in our house.

Through this cousin we met one of his friends who has just become a chayal boded. We have been thinking about things that we can do for him and had started to put together a care package.
I had a realization that I could kill two birds with one stone in that I wanted my children to write letters, and I wanted my daughter to practice writing in English. So I put together a little kit for her English class to write letters to our friend.

For mitzvot Unplugged I am sharing this without identifying details. Please do use this to write to soldiers and lone soldiers with your students and children.

Here is a PDF file of the letter to a soldier activity without identifying information that you can use with your students or children. With some changes you could use it for local service members where ever you live.

You may want to add this soldier craft if you choose to do this activity.

Letter to a Soldier

What is a Lone Soldier (Chayal Boded)?

A lone soldier is someone who decides to come serve in the Israeli army who does not have any immediate family in Israel. That is no parents, brothers or sisters in Israel. Imagine volunteering to protect Israel but not having your family nearby to support you when you have leave for shabbat, are hungry or need someone to talk to.

Our friend ____ came to Israel from ______ to learn in the overseas program in Yeshivat Kerem B’Yavneh, located near Kibbutz Yavne and Ashdod.

Kerem B’Yavneh was the first Hesder yeshiva in Israel. Hesder combines army service with learning and sees serving in the Israel Defense Force as a mitzvah. ____ decided to join the hesder program and enter the army. Since he is a lone soldier, he does not have family in Israel. He would love to hear from you. He would appreciate hearing about something that you learned in school, and would love to hear a dvar Torah based on something you have learned.

A letter starts with a greeting, has a middle filled with content and then finishes off with your name.

Here is what you can include in your letter to ____:

1. A greeting either formal (Dear ____,) or informal (Hi ___,)
2. Content
Tell him something about yourself (for instance, my name is ___ and I am a student at ____, I live in ____, I like squirrels.)
Tell him something you liked learning about Torah, Navi, Eretz Yisrael or Yerushalayim.
Other things you can tell him: a joke, thank him for serving in the army, or give him a bracha.
Share happy things not sad things.
You can also draw a picture
3. Finish off the letter (sincerely, with affection, warmly, respectfully, best wishes, love…)
4. Decorate the letter with a picture or borders.
5. Give the letter to ____ to send to ______. 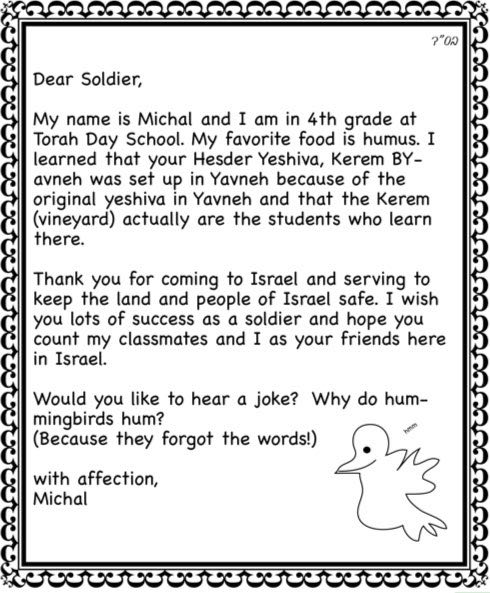