Wishing you and your family a happy, healthy and meaningful new year!

They’re made out of styrofoam balls, glue, glitter, feathers or pipecleaners, and plastic pins. After Rosh Hashana we’ll add a ribbon to hang them in our sukkah. We did a few experiments with glitter versus glitter glue and also coloring the ball first. It was a fairly easy project for three-four year olds but can also be done with older children. 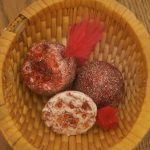 To make: Cut the ball in half making sure to leave some crevices to make the ball seem more like a cut pomegranate. If desired, color the ball with a red-ish shade first. Choose whether you want to use glitter glue, glitter or both and slather your ball with that media. Let dry.

Next take little plastic craft pins in a complementary color and randomly stick them into the cut side of the ball to mimic pomegranate seeds. Stick a feather or folded pipe cleaner at the top of the cut ball and you are done. The pipe cleaner method makes it a bit easier to add a ribbon later for hanging in the sukkah.

I was going to post a bunch of Rosh Hashana crafts here but they’ll have to wait until next year. I did see a cute Tashlish yarn art picture from Creative Jewish Mom which would be fun to make.

Usually you send Rosh Hashana cards before Rosh Hashanah, but if you make a Yonah in the big fish “popup style card.” You should be ok. I made some years ago with this design. Basically Yonah should be on a pull tab  and an opening should be left in the fish’s mouth so that you can see Yonah entering the fish.