for a while. This time of year is a good time to do it given the books focus on ahavat chinam and helping others. In particular, when witnessing so much is going on around the world today (hurricanes, monsoon…) and the acts that people are doing to help.

The story, written by Rabbi Shmuel Herzfeld and illustrated by Caryl Herzfeld, is about the struggle for Soviet Jewry. It is told within the context of struggling for a particular Prisoner of Zion, Anatole Sharansky (now Natan Sharansky), as well as within the context of two children learning about the problem from Rabbi Avi Weiss, and wondering how they, as two children, could make a difference to Sharansky, far away in the Soviet Union. It has the children taking part in the rallies, wearing bands and setting aside an “extra seat” for Sharansky, as the girl Sarah explains, “Even as we celebrate, we have to remember those who don’t get to have fun.”

The story tells about Anatole Sharansky, and other Prisoners of Zion, Avital Sharansky’s efforts, as well as community protests and rallies, largely those which took place in New York.

Purpose of the Book

The illustrator explained in an email, “We think that the story is of crucial importance.  We show the story of the fight for Soviet Jewry through reading the book aloud, and by showing how we all united to rally, and explain how it was done and to encourage others to become active in the cause of our ‘brothers’, the Jewish people…The goal is to speak about the fight to save Soviet Jews and to carry that into the future. ” 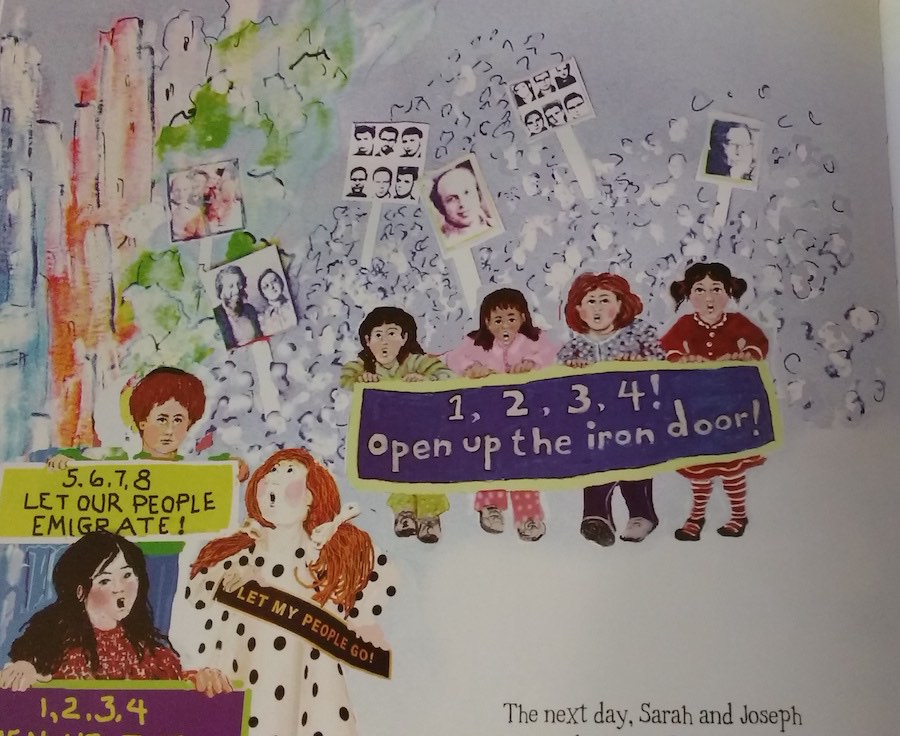 An Extra Seat is written with longer texts divided by texts in Larger Letters. The idea being that when reading this with children who can already read, an adult would read the longer texts and the children the shorter texts and the protest signs in the texts and illustrations (“1,2,3,4! Open up the iron door!” “5,6,7,8 Let our people emigrate”).  Both the texts and the illustrations leave room, intentionally, for an inter-generational discussion between parents or grandparents and children. To allow children to ask questions about the Struggle for Soviet Jewry, what happened as well as how people participated in the struggle.

Activities to Tie into the book: 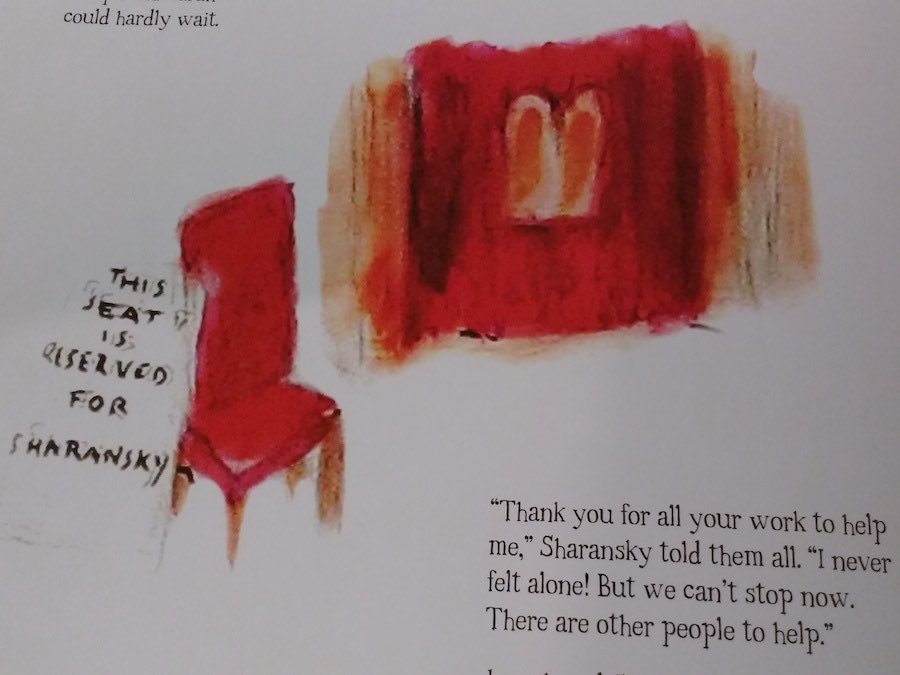 In the story Sarah sets aside an empty chair, the “extra seat” to remember that not everyone is able to celebrate like she was. Her setting a chair aside, could be connected both to the minhag/custom that some Moroccan Jews have of setting aside a chair in the sukkah for Elijah as well as the custom of setting aside a spot in a home to remember the destruction of the Temple.

With a little research, these could be based on figures mentioned in the book or in combination with interviews with members of the community.

Is there an issue important to the children? The educator can bring in a variety of topics and sample letters and let the children choose.

Recreate the protests with the children with signs

Chanting the protest slogans was an effective learning method. Making the signs and then protesting would as well.

Following up on families today

I would love to see some projects following up on what happened to former prisoners of zion and their families. I was twinned with a girl around my Bat Mitzvah. My letters never got through and we never were able to find her but I always wonder what happened to her. Her name was Victoria Abulyak, maybe someone out here has met her.

This in theory could be arranged. Email privately for further details.

Our Ida Nudel Testimonies of Former Prisoners and Refuseniks – This is difficult to find. It was based on a student project by Tal Hammel in 1980 on Ida Nudel in which she interviewed former Prisoners of Zion about the influence Ida Nudel had on them. Ida Nudel was at the time in Siberia and forbidden to emigrate from the former Soviet Union. There are some quite amazing stories that are inspiring to read. I am continually amazed at the idea of Nudel grounding up vitamins to add to cakes sent to dissidents to maintain appropriate nutrition.
Fear No Evil

by Natan Sharansky – Autobiography about Sharansky’s time as a prisoner of Zion.

Open up the Iron Door: Memoirs of a Soviet Jewry Activist

by Avi Weiss– About the Student Struggle for Soviet Jewry. I was lucky enough to have the chance to discuss this book and the Ida Nudel book with Rabbi Weiss recently. He pointed out that their first hafgana/protest was a quiet one.  They never made that mistake again. Also the first time Rav Shlomo Carlebach sang Am Yisrael Chai was in the context of the Student Struggle for Soviet Jewry. This is a good history of the movement in America.

Next Year in Jerusalem

by Avital Sharansky (spelled Shcharansky) –  This book is almost impossible to find but an important part of the story.

Operation Wedding a film by Anat Zalmanson-Kuznetsov  (Interview with Natan Sharantsky about the influence of Operation Wedding on his efforts for Soviet Jewry  and the affect on Prisoners of Zion:

“Similarly, he recalls that during his incarceration in Lefortovo, Ukrainian and Armenian inmates had asked him resentfully why there were Western protests for Jewish prisoners but not for them. ‘How many millions of Ukrainians are in America?,’ Sharansky remembers asking them. ‘Why are there no demonstrations for Ukrainian political prisoners? You could make a big change.'”

30 years after Glienicke Bridge FEBRUARY 11, 2016
moving piece by Rachel Sharansky Danziger about her father’s “seder” every year recognizing the day he was freed. Also moving to read the comments on the piece.

“As my parents’ daughter, I am forever aware that I owe my existence to the people who yelled with my mother. I wouldn’t be here today if you, the Jews of the world, wouldn’t have opened your hearts and your homes and your purses. You marched in rallies, sent letters to your representatives, paid my mother’s tickets as she flew from one demonstration to another. You hosted her. You encouraged her. Your yells broke through the Iron Curtain. They broke into my father’s cell long before they broke him out of it. And they broke into my inner geography, where they ring and echo to this day.”

Now a Knesset leader, former prisoner of Zion returns to his Moscow cell June 28, 2017
A piece by Marissa Newman about Yuli Edelstein’s visit to his former prison home. This piece is overall moving but this fits nicely into the theme of helping:

“I told the story in Stockholm [in 2014], at a Shabbat dinner, and a man came up to me and told me ‘I’m one of those people.’ So I don’t know how the wheel turns,” said Edelstein. “We always talk about ourselves. We were the refuseniks and the Prisoners of Zion, but there were people supporting us,” he said.

Do you have other ideas to add? 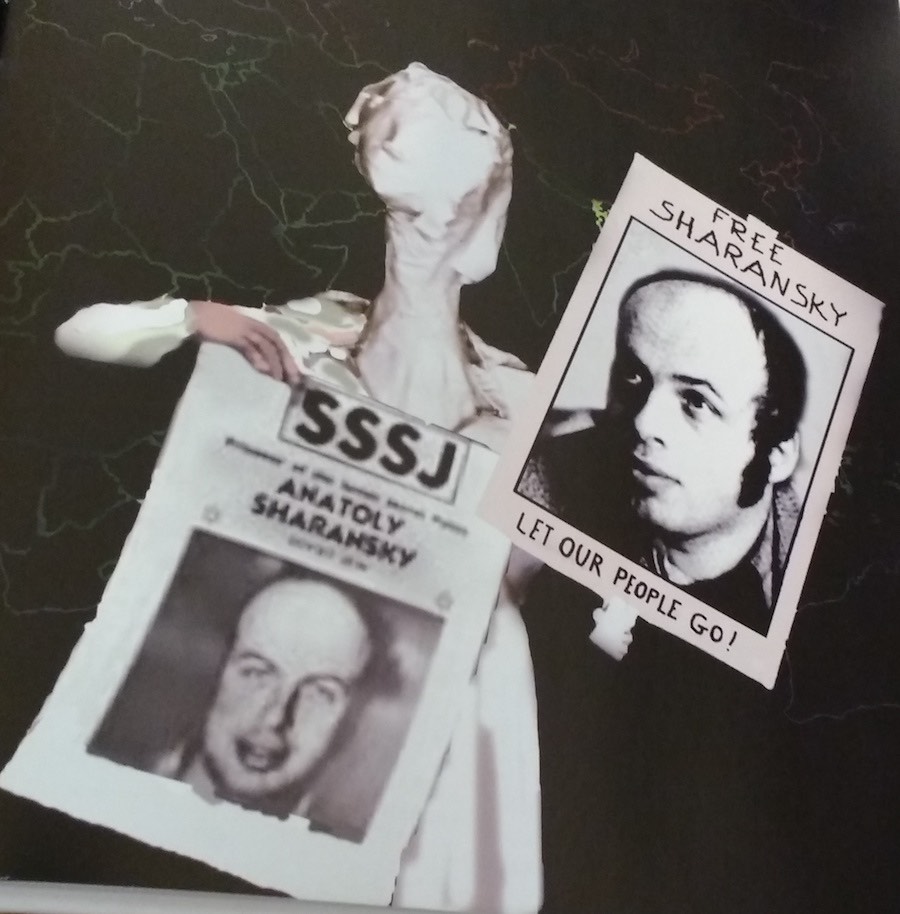 Images from An Extra Seat: