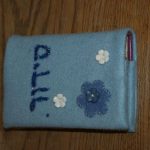 Chodesh Tov and happy new year. Before you wonder what thats about, yesterday as I was walking with my daughter and husband a large group of people of Chinese descent walked by with Israeli flags waving. They were saying “Shalom! Happy New Year!” and handed out red envelopes with dollars inside for Chinese New Year. They were apparently an evangelical Christian group from around the world, which is certainly not unusual, but I never thought I would get a Chinese new year greeting in Israel. Toronto, most definitely, Jerusalem, not so much.

It has been crazy busy- I’m revamping a website, creating identity material for a realtor, working on some small projects (for a synagogue and others) as well as the usual things that go on. On the bencher front we have gotten our first orders for use in Chicago and Montreal and my chug (class) has been growing lately. I have alot of projects to post but I haven’t had time to post them. I also want to post some Purim related posts and will try to get to that this week.

In the meantime here is a project made by a chug participant- a siddur (prayer book) cover using felt and buttons.