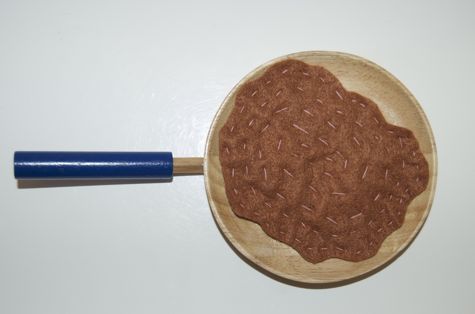 This is a simple felt food latkes tutorial for Hanukkah. Everyone knows that on Chanukkah (Hanukkah or Hanuka- however you want to spell it!)  you eat oily foods. The oily foods most connected with Chanukkah are potato latkes (pancakes) and sufganiot (donuts.) This tutorial will show a very simple latke pattern. 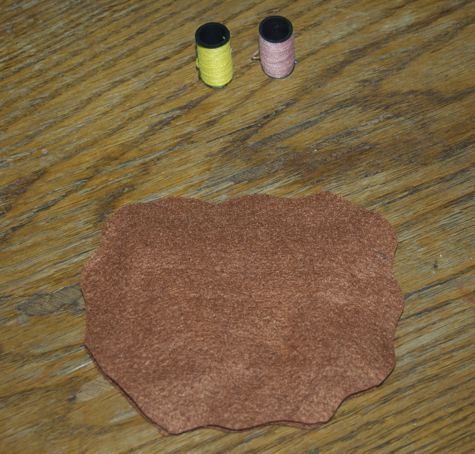 Latkes are not a particular shape, they are sort of round, but not exactly so cut two identical roundish shapes by folding over or layering your fabric of choice. As you can see, my fabric is brown felt. I cut my felt in an irregular oval/rectangular shape with scallopy edges. 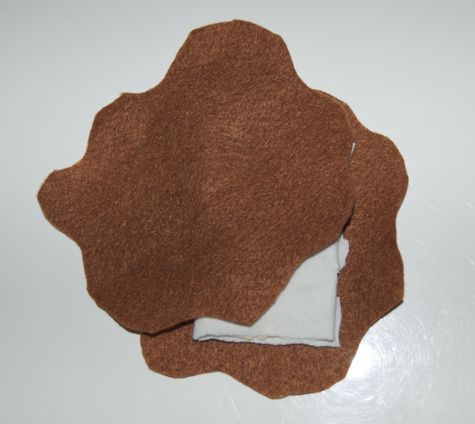 I decided to top-stitch this latke but you could also stitch on the reverse side leaving an opening, reverse the latke to the correct side and then fill it. For a top stitching scenario, it is necessary to layer your filling between your two pieces. Can you guess what my filling is? Old t-shirts cut into rectangles smaller than the length and breadth of the latke.

I stitched from the outside in in a circular pattern but one could start from the center and move outwards or write “latke” or any pattern.

For this project, I chose brown felt and pink thread for this latke (see top photo of the latke in the frying pan.) Alternatively one could reuse old t-shirts and use fabric markers or whatever material and thread are of interest.

I am making a sufgania (donut) for my daughter with t-shirt material using a pom pom as the jelly filling. She has been asking me to finish it, a few times a day and I only started it yesterday. The latke has been a big hit with her (she even brought it for “show and tell”) and  I have also been asked to make some more latkes (for someones besides my daughter.) Maybe I will ask the chug (class) if they’d like to make them too. I forgot to bring it up last week but not to worry they’re doing fun projects.

I hope this felt food latkes tutorial was helpful.