We are grateful to Rabbi Noah Greenberg for his guest post about Kesher Tefillin as part of this years Mitzvot Unplugged. 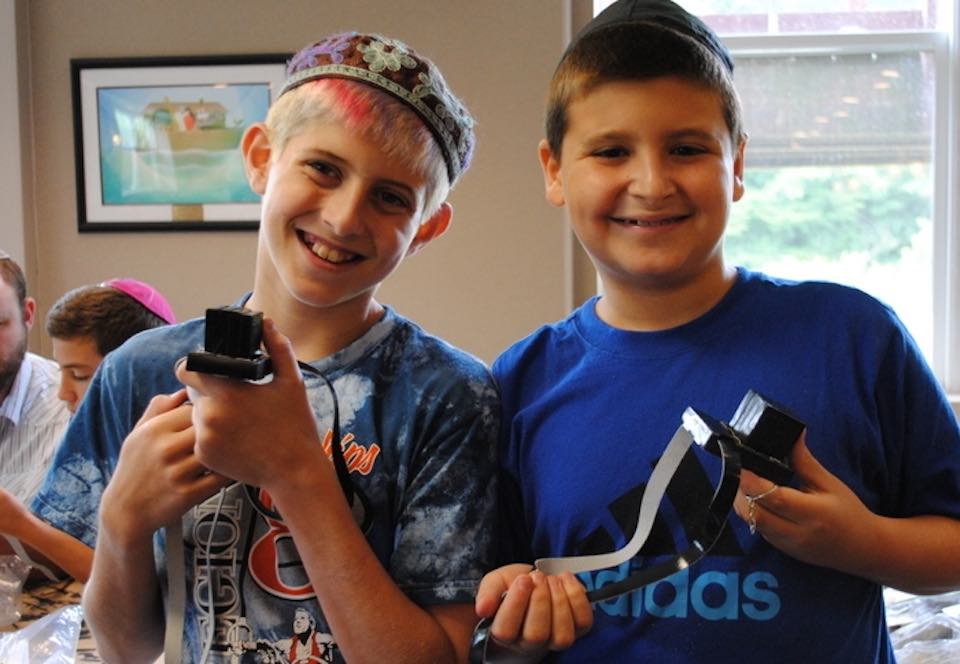 Educators and parents are constantly striving to energize the bar/bat mitzvah experience. To give the budding Jew a Jewish purpose. Participating in Kesher Tefillin  is transformative for its participants. It is a rich and powerful alternative to the lackluster programs often offered to bar mitzvah aged children at this critical point in their spiritual development.

Taking Ownership of The Mitzvah of Tefillin

To a young Jew approaching Bar Mitzvah, Tefillin should be objects of intense spiritual excitement. Sadly, they are often archaic remnants of a previous age. Relegated to the underwear drawer after the initial photo-op. They seem irrelevant in the high-speed world of computers and video games.

However, Tefillin address an astonishing spectrum of Jewish concepts. Values that range far beyond the actual Tefillin themselves: including Kedushah, responsibility, devotion, dedication, continuity, connectedness, and identity. At the same time, they are an esoteric mitzvah, obscure and mysterious. Unexplain-able and incomprehensible.

Kesher Tefillin brings Tefillin and its range of values alive in a child’s hands. Kesher Tefillin engages and empowers using a fusion of “hands on” creativity, learning, and tangible results. The spiritual ownership of this one central mitzvah evokes an instinctive appreciation of Jewish life focused by the mitzvah of Tefillin.

Following in the Footsteps of Moshe Rabeinu 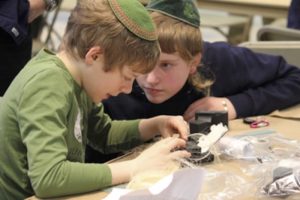 Tefillin today are made with very sophisticated equipment and technology. Heavy leather is formed in hydraulic presses. Sophisticated computer controlled machinery is used to shape, mold and color the Tefillin. The results are, of course, beautiful. But did Moshe Rabeinu (Moses) make his Tefillin that way? I think not! Such equipment did not exist in the Sinai desert. Yet Moshe, donned Tefillin – as have Jews for untold generations since then. How did Moshe Rabeinu make his Tefillin?

Kesher Tefillin follows in the footsteps of Moshe Rabeinu  – hand-crafting our own Tefillin in a way that Moshe might have done. Together we make a pair of kosher Tefillin. Together we discover the spirit of the mitzvah of Tefillin and their holistic interconnection with every other aspect of a Jew’s life.

Taking a raw piece of parchment, participants cut, mold, fold emboss and color it, creating their very own kosher Tefillin. They select and insert the parchment scrolls, as well as attach and tie the straps. They study the sources reviewing the holiness of the Tefillin and the Halachot (laws) of making and using them. When completed, they will finally don their new Tefillin with the appropriate kavanot and blessings.

Would our new Bar Mitzvah so cavalierly throw his Tefillin in the drawer with his underwear after such investment and hard work – now that they have a true understanding of their meaning and significance?

Ownership of the Mitzvah

The Kesher Tefillin program requires a genuine investment of time and energy on the part of the participant. The multitude of diverse tasks involved is complex, requiring accuracy and concentration. This need for investment is exactly the element that creates the spiritual bond of the participant with the Tefillin. Because the process is difficult, but achievable, and because the participant perceives his investment in the process, he gains true spiritual ownership of the mitzvah. Without this investment, the program would be no different from all the other instant gratification activities that leave today’s child spiritually bankrupt.

Kesher Tefillin is NOT a glorified art project. In addition to the “hands-on” aspect, the Kesher Tefillin program includes serious text study. The students will learn from Rambam, the Shulchan Aruch, the Mishnah Brurah and the Gemarah. The level and depth of the text study can be adjusted according to the time allotted and the age and ability of the participants. 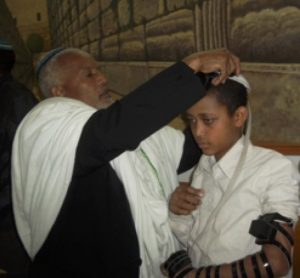 The time required to complete the program is about fifteen hours. This can be accomplished in several ways. In a school setting, the time could be spread out over a week, perhaps including Sundays. Usually it is broken up into two sessions per day of 1½ hour each for a total of three hours per day. The program can be incorporated as part of the regular school day curriculum or as a father/son extra-curricular program, with students of bar mitzvah age or older.  Additionally, it is a wonderful program for adults.

Historically, other schools have dedicated all or part of their daily Hebrew and/or Jewish studies time to Kesher Tefillin for the duration of the project.

The project has the support of numerous prominent rabbanim (rabbinic authorities).  Among many others, the project and the innovative Tefillin themselves have the support and approval of HaRav Nissim Karelitz, HaRav Sariel Rosenberg, and HaRav Shmuel Eliyahu in Israel.  In the United States, HaRav Yisrael Belsky ztz”l from the Orthodox Union, and the Noveminsker Rebbe have written letters of support.  The entire project is supervised by a board of rabbis both in Israel and in the United States.

Where has the Kesher Tefillin program been done?

The Kesher Tefillin program has been run in cities all over the world. Participants from day schools, summer camps, synagogues, communities as well as private groups have enjoyed the experience of creating their own Tefillin. Some of the locations include day schools such as Beth Shemesh Educational and Residential Center (Kiryat Chinuch) in Beth Shemesh, Baltimore’s Beth Tfiloh Dahan Community School, Charles E. Smith Jewish Day School in Washington DC, Harkam Hillel Academy in Los Angeles, , Moriah College, Sydney, Australia, Striar Hebrew Academy of Sharon MA, and Yeshivat Bnei Chayil in Jerusalem. In addition, fellows of the Hebrew University Nachshon Project and campers at Camp Stone and numerous Camp Ramah campuses around the United states have participated in the program.

In addition to those enumerated above, the Kesher Tefillin program has been experienced by synagogues and communities including:

A Three Minute Overview of The Program

In the words of a participant of Kesher Tefillin, “Thank you so much for the time and the teaching. I know that I will wear them so that I will be closer with Hashem. This is an experience of a lifetime that I will never forget.” In other words, participating in Kesher Tefillin is a hands on way to build and reinforce a connection with God and enhance motivation in mitzvot.

For more information about the program: