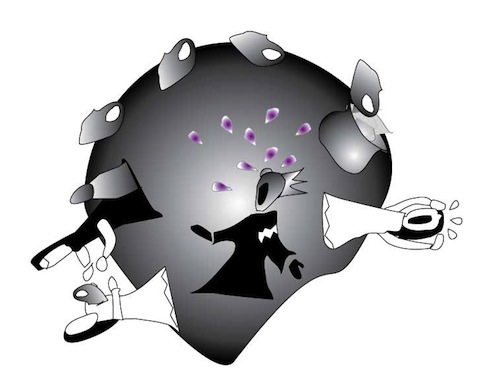 I have had very little to say in the past few weeks. Just so sad about all four boys who were killed.

I don’t know why, but I was reminded of this piece that I made quite a number of years ago when I was also feeling sad about events in the news. It is a depiction of a terrible story in Melachim Bet (Kings 2) when there was a famine and a woman cried to Yoram King of Israel, that she and another woman made a pact to sacrifice their children with hers being first and when it came time to sacrifice the child of the second woman, the woman had hidden her child. When the king heard her story he tore his clothes and cried.

When I depicted this story, I was mostly interested in the reaction of the king and the futility of the story, not in a commentary or comparing.

I have no words except to think about the wish of the Shaar, Fraenkel, and Yifrach families for individuals to do good deeds and the wish that things will not get out of control.

I have posted on Facebook some resources for parents who want to discuss these issues with their children. Feel free to take a look there.