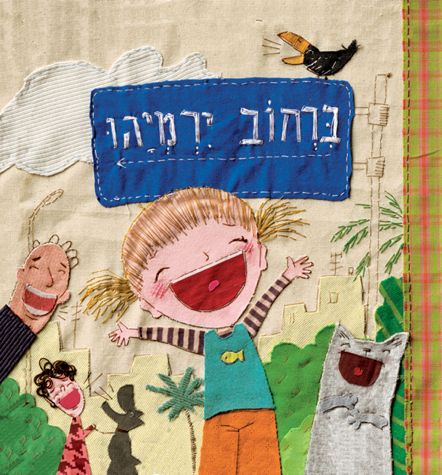 I have been meaning to post about this book for a long time but the Tenth of Tevet is appropriate due to the name of the book and the connection of the Prophet Jeremiah to the period of seige and destruction of Jerusalem.

This book has a much happier subject. I found it at Shavua hasefer (book week) this past year and immediately bought two copies and showed it to my class (doll clothing) for inspiration.  The book is called BiRechov Yirmiyahu or Jeremiah Street and is written by Libi Daon and illustrated by Lena Guberman.

The story is about the Haruvi family, who  live on Jeramiah street in Tel Aviv, and have great difficulties with loud sounds. They have managed to pressure their neighbours into conforming to their sound needs. When the municipality begins building a new park across from their apartment, the family begins to stage protests until they realize that parks and neighbourhood interactions are actually good things. (In the image below, Mrs. Haruvi is requiring Dani Mitz to only deal with soft, non-noisy fruits during siesta time.) 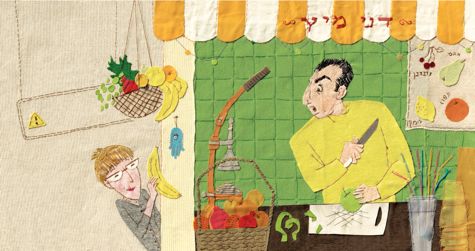 The illustrator, Lena Guberman, a winner of the Israel Museum prize for children’s book illustrations, has done amazing things in illustrating the book, with fabric. Small scraps, thread and a bit of shading become intricate detailed images of life on Jeramiah street. The three actual Jeramiah street personalities (Dani Mitz, Ezra Chashmal and Tamir HaSapar) look like the originals including details of age and physiques. In addition, there are details which make jeans look like jeans, figures have dimension and even make objects appear to be moving. 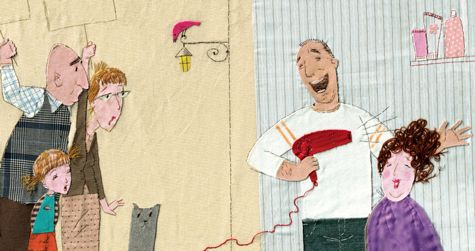 In the page where Tamir Hasapar (barber) is blow drying a woman’s hair (immediately above), her hair actually seems to move. Dani Mitz’s juice stand feels like a juice stand and his cutting board has stitched cuts in it. The folds in Ezra Hashmal’s (Electricity) pants are in the appropriate places when he is sitting and riding his bicycle. The layering and detail are really sumptuous and the photographs really do make you feel as if the finished product is somewhat three dimensional. You really want to touch it and get inside of it. 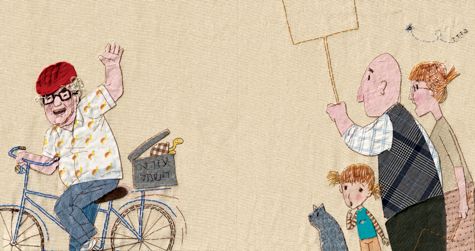 If one were into home schooling things, this book would be great for talking about themes of neighbourliness, quiet/loud and would be great fun as an excuse to make stitched pictures.

To buy BiRechov Yirmiyahu in Israel:

I would like to thank Lena Guberman who has very generously provided photos of her work. Note that these images are without text and layout. To see how the illustrations were incorporated into the book, buy or borrow the book.